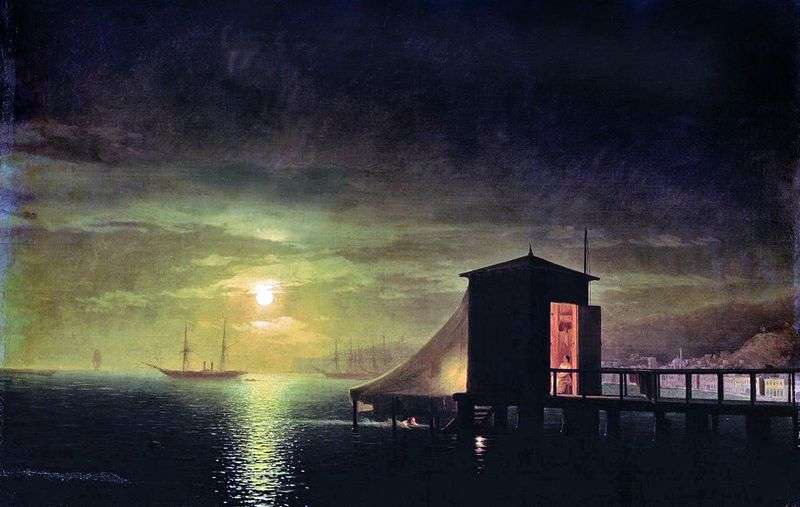 The great Russian painter Ivan Konstantinovich Aivazovsky painted the painting “Moonlit Night: The Bathhouse in Feodosia” in the middle of the 18th century. In the picture I see a calm night sea, consecrated by the bright, yet diffused light of the full moon, making its way through the light haze of clouds. The vast, smooth sea surface, connected to the black night sky, occupying more than half of the picture, creates a feeling of mystery and tranquility.

In the foreground, on the dock is a tiny house with an open door, through which a muffled light bursts out. This is, apparently, a bathing place. Through an open door I see a female silhouette. Apparently, this is a young bather, which attracts the night sea. She sits on a chair in a long, light dress. She has dark hair, her hands are kneeling. The hair is collected from behind in a neat lump. The moon track seems to illuminate the sailboats with the sails down and the embankment, on which a vague silhouette is visible.

Most likely, this is a young fisherman, in love with the sea. In the distance, on the slope of the hill there are cozy little houses. The windows are dark, their inhabitants have long gone to bed. The hills themselves are densely covered with trees, and their appearance gives a feeling of fairy charm. On the night sea, like a sea mermaid, leaving behind a ripple, a woman sails. According to the fashion of that time, she bathes in a long white shirt. Apparently, it was she who took advantage of the house and then rushed to her night swim. And, apparently, this is waiting for her girl, sitting in the house of the bath. The sky, the higher, the darker and more impenetrable.

And in general the whole picture is written in such a way that, the closer to the center, the more clearly the details are written, the brighter and lighter the colors. This picture, undoubtedly, is considered one of the outstanding works of the artist IK Aivazovsky.