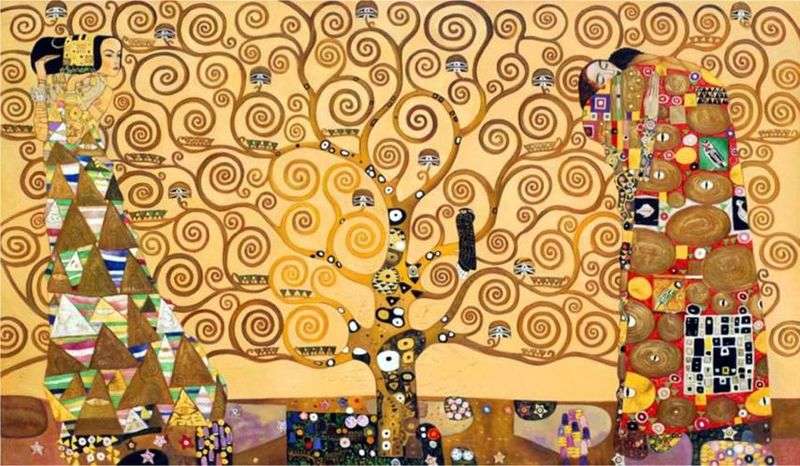 Name the controversial Austrian modernist Gustav Klimt is well known to anyone who is even slightly interested in art. Past its brightest of pictures it is impossible to pass. But among them there are works which are still become a cause of controversy and discussion. One of them – “The Tree of Life.”

The very title of the painting – “Tree of Life” – awakens in the mind of any human association mass. This is the biblical Tree of Knowledge, which includes all the wisdom of the world, and more down to earth family tree, showing the origin of the individual, and more.

It is this element occupies

the central part of the frieze, extending to neighboring elements. Its branches curled spirals – another ancient symbol, a sign of eternity and infinity.

If you look at the picture you can detect a lot of other elements, primarily circles, triangles and squares. Critics call them avatars male and female, referring to the works of Sigmund Freud, who had a strong influence on the work of Klimt.

But perhaps the most important element of the picture – a black crow sitting on a branch. He seemed to be reminded that life without death is impossible, as the Death without Life. And it is this dialectical unity makes them harmonious existence.

Above this picture Gustav Klimt worked long six years, from 1905 to 1911. It was his last monumental work. The basic tone – gold, which is characteristic of his work. Other colors only emphasize the clean and bright gold.

This frieze refers to the golden period, as well as many other famous paintings. It is this technique was the best received by critics. Apparently, its roots must be sought in a child artist, because his father was an engraver in gold, and taught his son working with this material.

One can go to talk about the symbolism of the painting, its techniques, ideological and other equally important things, but they will not help answer the question, why is the Golden Tree of Life, and sitting on it Black Raven cause gazed into the web, looking for the hidden meaning? But it everyone should answer for himself.