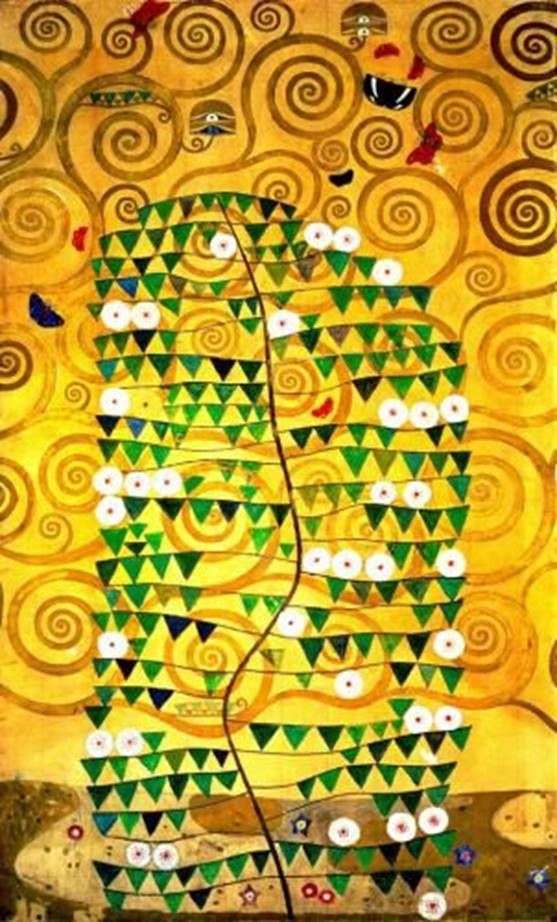 Between 1905 and 1909 Gustav Klimt, a well-known Austrian artist and founder of the modern, worked on decorating the Palace of Stockle in Brussels. A luxurious mansion was built for the rich industrialist and patron of art, Adolf Stokle, by architect Josef Hofmann. Hoffmann, Comrade Klimt, who heads the Vienna Secession with him, invited the artist to work on decorating the dining room. Klimt and Hoffman professed the same artistic views, so they easily found a common language.

In their design, the architecture and design of the walls should have been a single work of art, so it was necessary to maintain harmony between the architecture of the room and painting. In addition, Stockle owned a large collection of Asian art – exposed in the room, it should not have been discordant with the decor of the walls, because of which Klimt tried to keep a balance between his own vision and the eastern atmosphere. The work was facilitated by the fact that the construction and decoration of the interiors was carried out simultaneously.

A few years before that, Klimt, almost did not leave Vienna, went on a trip to Italy. He visited Venice, Florence and Ravenna, famous for its golden mosaics. There he mastered the mosaic technique, the influence of which can be seen in the decorative friezes of the Palace of Stockle. “Tree of Life” – a panel in the dining room of the Palace of Stockle. Klimt knowingly used such an important mythological image. The tree of life simultaneously expresses in itself the image of the world and the origin of the individual. In addition, it is possible that this is the embodiment of a biblical tree planted by God himself in paradise and giving eternal life. This is indicated by a background painted with spirals, the ancient symbol of infinity.

The tree itself consists of a winding trunk and branches, like a road, dotted with triangular leaves and round flowers. Critics agree that triangles and circles are an embodiment of the male and female origins, taken by Klimt from the extremely popular work of Sigmund Freud at that time. In the picture there are also images of butterflies, which in Western culture are considered a symbol of immortality, revival and resurrection. This was the last major monumental order of the master, belonging to the “golden period” of Klimt’s work. He received this name not only because in the works of this period the artist generously used gold, but also because at that time a number of recognized masterpieces were created. To them, the artist also attributed his work on the decoration of the Palace of Stockle.