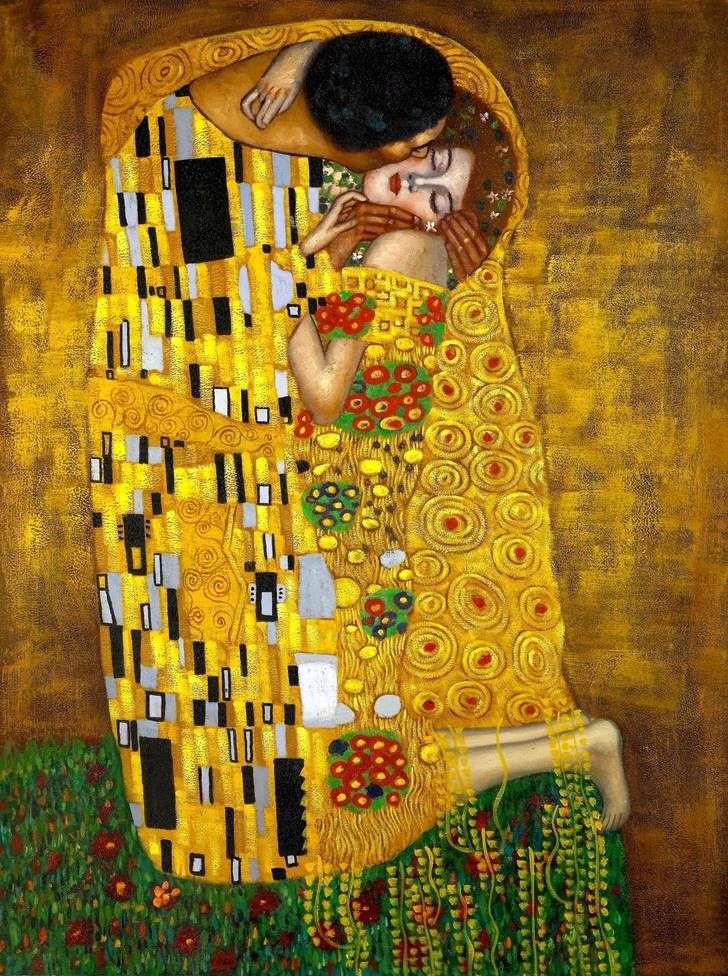 Painting Gustav Klimt “Kiss” belongs to the “golden” period of the artist’s work. This segment of his activity is called “golden” for good reason. It was in the second half of his creative development, Gustav began to often use the golden palette for writing paintings. As a radiant shine, the author used not only paint with gold particles, but also sheets of gold leaf. The presented work has a value in the literal sense, which is invested in it by those who are interested in the material component of art.

Much of the canvas is filled with gold leaf. This is an iridescent yellow cocoon, in which the lovers are placed, frozen in a long kiss. It can not be said that the canvas corresponds to all the rules of classical painting, since a generally accepted letter exists here along with the metal. However, the picture has a bright and recognizable Klimt color, alternating with a complex interlacing of oil smear and gold. The abundance of yellow and ocher “insulated” the canvas. Made it a sunny and radiant yolk at the ready clear light spots. The plane is paved with flowers and grass. Fine drawing is jewelry accurate – we must pay tribute to Gustav’s patience. The far sky is filled with a spray of golden drops.

According to the plot structure, the picture “Kiss” is multi-layered, but it is easy to read, despite the disguised outlines of the masculine element that surrounds the kissing. Frequent use of the phallic symbol in the works of the artist is alarming and makes you think about Klimt’s unhealthy interest in sexual nuances. However, omitting this moment, the picture can be taken as an iridescent discovery of a different, rather than a rough inclination, feeling. The work reflects what it is customary to talk about with anguish and a rapid pulse – this is love, eyes in the eye, one breath for two, etc. Ecstasy, which two people experience, probably lived in the thoughts of the author himself, and now of ours. A prolonged kiss lasted for decades.

The frozen action can not be interrupted, since the dangerous edge of the cliff is near. To keep the beloved man wrapped around the woman’s body, holding his small face with his hands, as if forcibly, dominating female weakness or infantilism. And in conclusion, many critics assume that the prototype of “Kiss” was the author’s own kiss with his beloved Flege Emilia. If this is true, then Klimt appears before the viewer as an insistent and passionate lover.