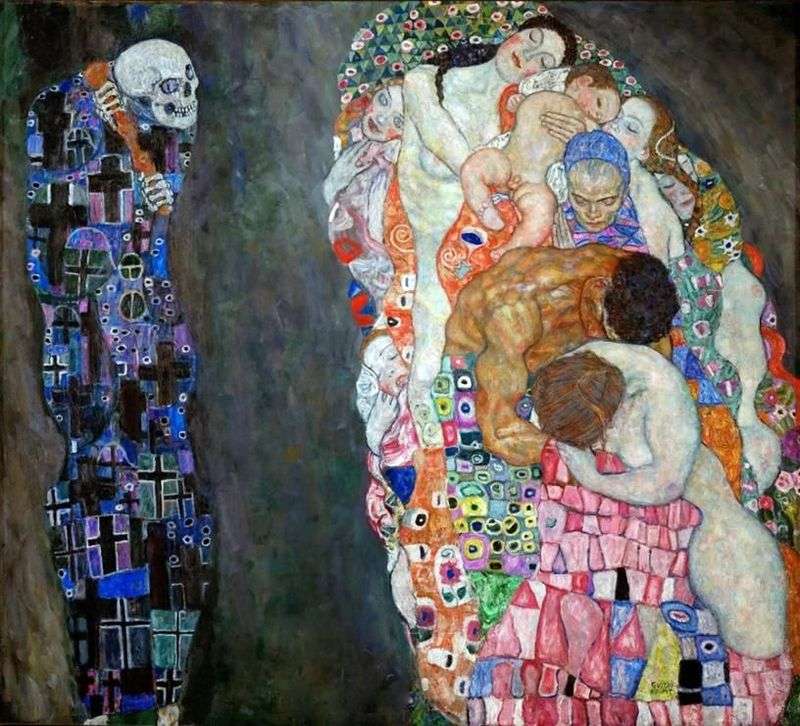 Do not have to think long to see the relationship of the picture with its name, life and death are clear here at a glance. But you can pay attention to several details of this picture. The artist did his work in his own style, the painting is rich in colors. Here are hundreds of different colors. It is enough to look at a man whose body

contains a lot of shades.

The composition of the picture is very interesting – a lean skeletal creature in a colorful stole representing Death, on one side of the picture, and on the other side its opposite is represented in the form of a clot of life that unites all ages of life.

If you look at the attire of Death or blankets, which are wrapped alive, you can see how thoroughly their patterns are worked out. This justifies the fact that the picture was written by Klimt for about eight years. In one work both smooth and sharp moments get along.

Because of the gloomy mood of the picture, it is difficult to imagine it hanging on the wall in a warm cozy house, it clearly does not fit into the interior. “Death and life” brings troubling thoughts, drives into depression, makes you think about death. Such a work place in a museum or private collection. Klimt just wanted to make sure that a simple image made people think about the deep, so that it would cloud the thoughts of those who want to die by their death or become a sinner. He was able to achieve this due to the fact that he was able to make the right emphasis on the most important moments of his picture.