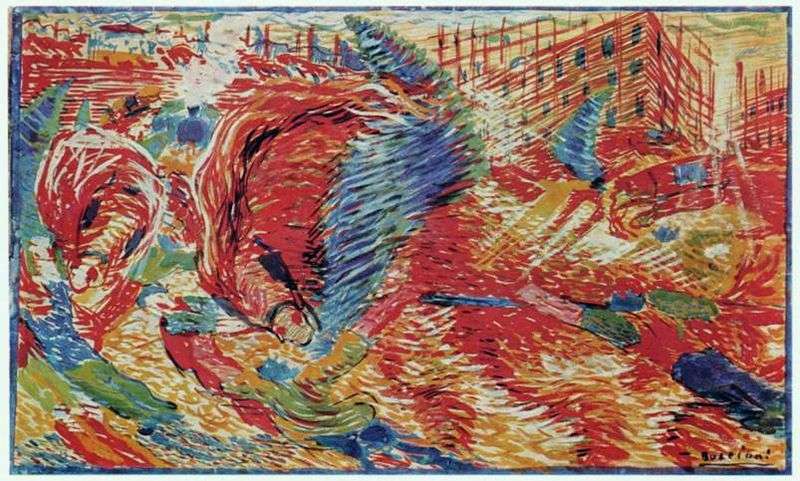 City Rises is an important painting by the Italian artist Umberto Boccioni.

In 1912, the painting was bought by the musician Ferruccio Busoni in a traveling exhibition of futuristic art in Europe. It was exhibited at the Museum of Modern Art in New York as part of their permanent collection, although currently is not listed as one of his paintings on display.

The original title of the painting was Il Lavoro , as it turned out in the Mostra d Arte Libera in Milan in 1911.

While the realistic elements are present, such as buildings, and space is still provided through the point of view, this picture is considered the first really work futurist Umberto Boccioni, although it is not much different from his previous works, all centered on the outskirts. In this picture, a naturalistic vision of previous works partially abandoned, replaced by a more dynamic vision.

Buildings in construction in the suburbs can be seen from the top of the tubes, but most of the space occupied by men and horses, melted together in a dynamic effort.Boccioni thus emphasizes some of the most typical elements of Futurism, the exaltation of human labor and the importance of the modern city, built around a modern needs.

The painting depicts the construction of a new city, with changes and technologies. Suburbs and the urban environment as a whole, formed the basis of many paintings Boccioni, by capturing the staccato sounds of construction in the street paving in a riot of sound and color offered by the observer of street scenes and characteristic street enters the house.