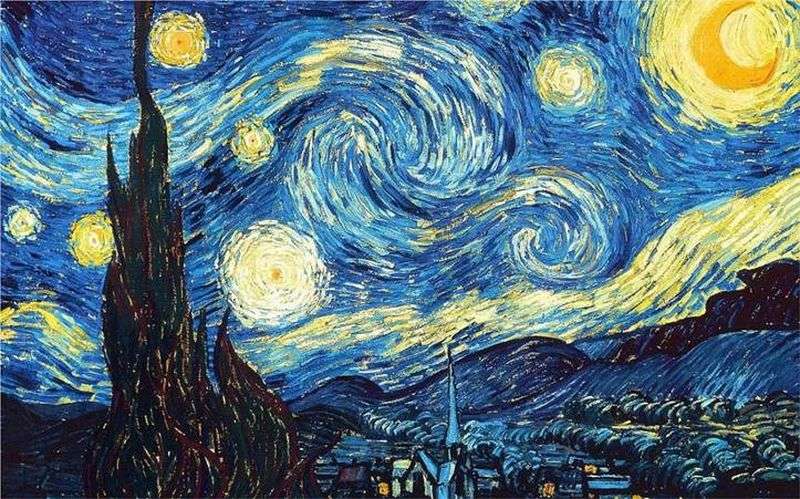 “Starry Night” was written in 1889 and today is one of the most recognizable paintings of Van Gogh. Since 1941, this work of art is located in New York, in the famous Museum of Modern Art. Vincent Van Gogh created this painting in San Remy on the traditional canvas size 920h730 mm. “Starry Night” was written in a rather particular style, so for optimal perception is better to look at it from afar.

In this painting shows a landscape at night, which has passed through the “filter” of the creative vision of the artist. The main elements of the “Starry Night” are the stars and the moon. They represented

the most pronounced in the first place to attract attention. In addition, Van Gogh used a special technique to create the moon and the stars, so that they look more dynamic, like constantly moving, bringing the fascinating light through the boundless starry sky.

In the foreground is “Starry Night” shows the tall trees , which stretch from the earth to the sky and the stars. They seem to want to leave the solid earth and join the dance of stars and the moon. On the right picture shows the unremarkable village, which stretches from the foot of the hills in the silence of the night, he is indifferent to the shine and the rapid movement of the stars.

In general, when considering this painting, the artist feels masterly work with color. This expressive distortion is well matched with the unique art strokes and color combinations. Also, there is a balance of light and dark colors on the canvas: trees on the left at the bottom of the dark offset high brightness yellow moon, which is located in the opposite corner. The main dynamic picture element – a spiral curl is almost in the middle of the canvas. He gives each element of the dynamics of the composition, it is also worth noting that the stars and the moon appear to be more mobile than the rest.

“Starry Night” also has displayed impressive depth of the space, which is achieved through the proper use of brushstrokes of different sizes and orientation, as well as the overall color combination pattern. Another factor that helps to create a picture of the depth – is the use of objects of different sizes. So, the town is far away, and in the picture it is small, and the trees on the contrary – they are small compared to the village, but are close and therefore the picture they take up a lot of space. The dark foreground and a bright moon in the background – a tool for creating color depth.

The picture on the increasingly belongs to the picturesque style, rather than linear. This is due to the fact that all elements created using a web smears and color. Although the establishment of the village and the hills of Van Gogh used the contour lines. Apparently, these linear elements were used to the best possible way to emphasize the difference between things earthly and heavenly origin. Thus, the image of the sky turned from Van Gogh is extremely picturesque and dynamic, and the village and the hills – a calm, linear and measured.

In the “Starry Night” predominant colors of, the role of light is not so noticeable. The main sources of light are stars and the moon, which can be determined by reflexes, which are located on campus buildings and trees at the foot of the hills.

The painting “Starry Night” was painted by Van Gogh during treatment at a hospital in Saint-Remy. At the request of his brother, Van Gogh was allowed in the case of improving the health of paint. Such periods occurred quite frequently, and during this time the artist painted a series of paintings. “Starry Night” – one of them, at the same time it is interesting that this painting was created from memory. This method was used by Van Gogh quite rare and not typical of this artist.

If we compare the “Starry Night” with the early works of the artist, we can say that it is more expressive and dynamic creation of Van Gogh. However, after writing the flavor, emotional load, dynamics and expression on the canvases of the artist only increased.