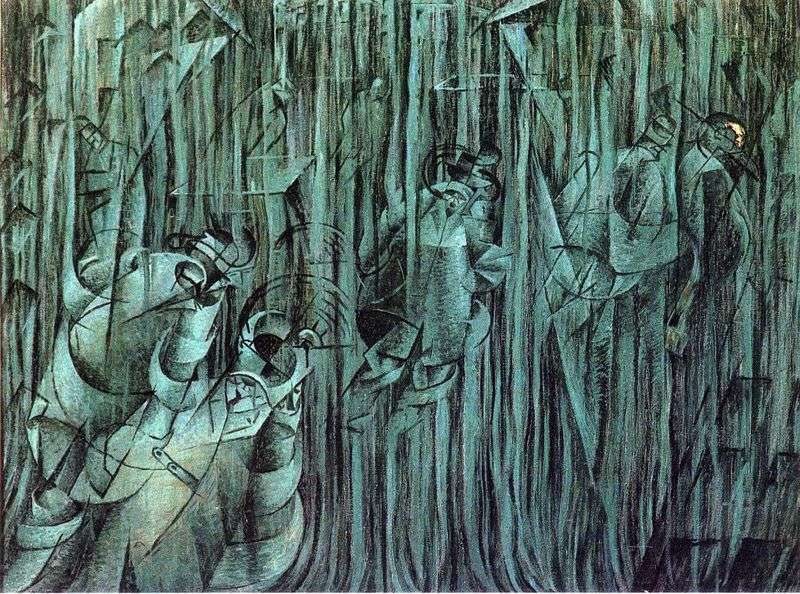 One of the most striking and profound works of Boccioni is “The State of the Soul”. In a series of canvases, the “mental state” of the artist and the world around him is written out. Nerve lines, randomly layered crystals create a background of chaotic subconsciousness, images “degenerate” from it, which, in turn, cause the viewer to associate with animals, machines, people. Someone’s obscure figures and misty faces appear unexpectedly, “floating out” from the nooks of Boccioni’s artistically intuitive world.

Beginning with the “prescriptions” of Marinetti, the founder of Italian futurism, Boccioni himself gradually becomes a theorist of a new direction in painting. The confusion of things that are very far from each other, the departure from the very desire to complete the composition, how to open it from within, to let in the surrounding space and thus to reveal the essence of the thing itself is characteristic of the creativity of Boccioni.

The artist is distinguished by his disdain for the form as such, his own approach to the color solution of the composition. In his works the crying and the phantom were combined, the very concept of picturesque harmony and integrity was sometimes denied. His “doing things” in the sculpture of Boccioni already at the beginning of the XX century. laid the foundations of the future direction in art – pop art.

In 1915, Boccioni, on his own initiative, enlisted in the ranks of the regular troops and soon died, becoming a victim of accident – a fall from the horse. Having lost his leader and mastermind, a group of Italian futurists soon disintegrated.