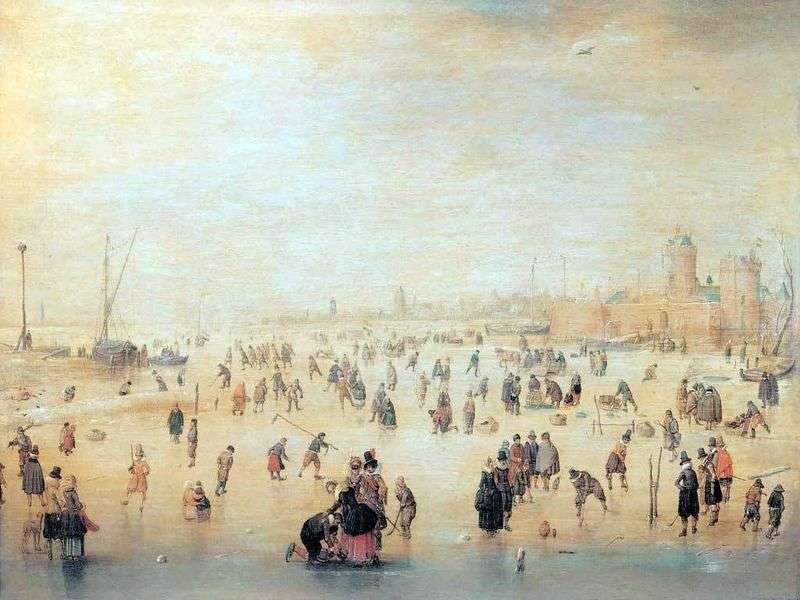 Hendrik Averkamp – one of the largest Dutch painters of the early Baroque, he was the first who started working in the style of realistic landscape painting. Averkamp, who was deaf and dumb from birth, portrayed almost exclusively winter landscapes in his early works. The inability to experience this world with the help of hearing has exacerbated his sense of color, ability to notice the smallest elements in multi-figured compositions.

In the transmission of the elusively changing lighting, he was not equal. Urban winter landscapes made the artist widely known throughout Holland, so his work was unusually in demand during his lifetime. In the paintings of Averkamp, nature first began to be depicted as it really was. It was in this manifested a new artistic direction in Dutch painting, since the dominant until this time of the Flemish school of painting, realism was completely uncharacteristic.

“Skating behind the city walls” is one of the most characteristic works of the Dutchman, painted in a silvery range, the colors are carefully chosen. Small figures of skaters are inscribed in the volume space of the canvas with decorative precision. One of the typical compositional solutions of the artist is a very realistic image of a cold transparent winter sky, filling the whole picture with a feeling of freshness and freshness in the northern winter. The pedantry of Avercamp in relation to small details was also evident in this work. So, a carefully selected red belt on the lady in the lower left corner of the canvas brings animation, transferring the cheerful excitement of vacationing townspeople who came to ride on a frozen lake.

The very situation in the country, which developed by the middle of the XVII century. namely the Protestant reform, greatly weakened the influence of the church on the life of the country, the formation of a powerful middle class in society, led to a reorientation of style and direction in the work of painters, including Averkamp. A small format of his canvases, made by easel, was due to the fact that henceforth painting was not intended for elected representatives from the higher caste, but for the general audience.

At the end of his creative career, Avercamp significantly expanded the scope of his work. Now he had more characters in the creation of art scenes.

A recognized master of a realistic urban landscape, Averkamp enjoyed a well-deserved reputation both in the artistic environment and among ordinary Dutch, remaining one of the most outstanding representatives of Dutch painting.