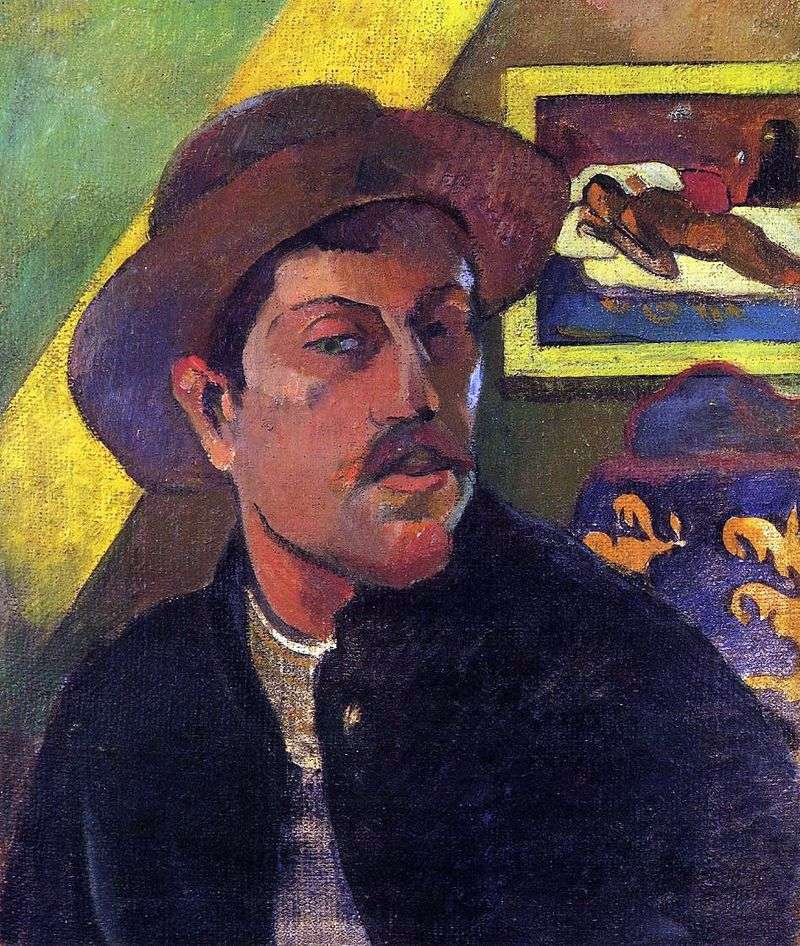 For his creative way, Gauguin created more than one self-portrait, while each of his works of this genre wore a bit of originality and innovation. Self-portrait in a hat was started in Tahiti, but the final finishing touches were made by the painter already in Paris.

Gauguin portrayed himself in almost half-profile, raised eyebrows, a sidelined glance, a stubborn chin. But not only the figure of the artist attracts the attention of connoisseurs of the painter’s work, but also the background on which he portrayed himself. Without any difficulty on it you can see one of the most famous paintings of the

master – “The spirit of the dead does not slumber,” however, a sharp eye will immediately notice that this work is given by Gauguin in a mirror image. On the original canvas, Teghury’s head lies on the right side, while on the self-portrait we distinguish the silhouette of a girl whose head rests on the pillow from the left.

The painter was very fond of this technique – “remembering” in the new works already created canvasses, while never focusing on exact quoting. Most often, the artist shows only a fragment of the already familiar canvas.

In technical terms, Gauguin follows his style – pure colors predominate in the work, they are enclosed in clear clear lines. The presence of bright patterns, as coloristic elements, is also characteristic of almost all the canvases of the author.

On the canvas, the painter himself appears before the viewer, somehow detached, and even wary. In fact, the fate of Gauguin on this stretch of life can hardly be envied – the departure from Polynesia and disappointment in this region, the break with the pregnant Tehura, a difficult relationship with Anna Yavanska, the death of a beloved daughter from pneumonia, constant criticism and misunderstanding of the public.

Gauguin will stay in Europe for a while. In a couple of years he will return to Tahiti, and then move to the Marquesas Islands, not finding on the continent no peace, no happiness, no recognition.