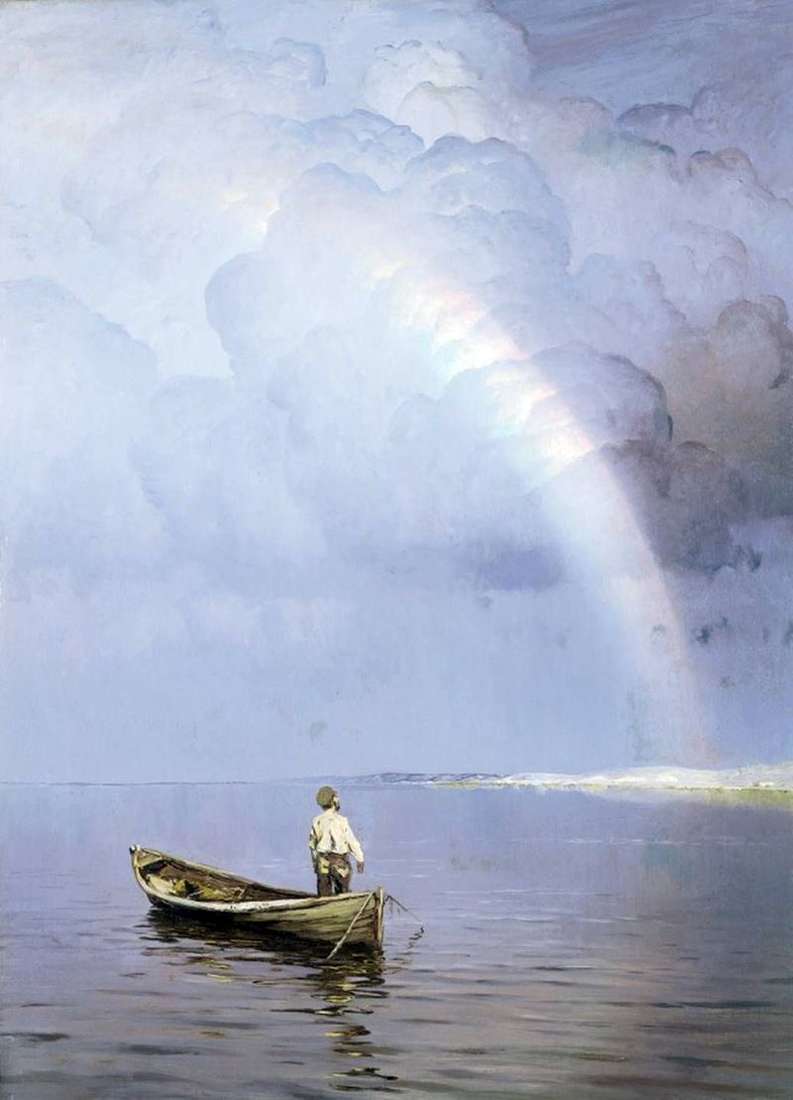 From the picture of NN Dubovsky “Rainbow” is warm, fresh and fresh. The plot of the picture is simple. On it we see the sea, the boat, the man and the rainbow. But the meaning is much more complicated.

The artist shows us a rainbow, not as a seven-colored strip, but as a white, big ray. It is on such a rainbow looks ordinary sailor, who stopped and specially rose. He admires this phenomenon. And although we do not see his face, we can imagine how he smiles and thinks, that the world is beautiful.

It is also worth paying attention not only to the composition, but also to the right colors. The sea seems to us a bit dark, after the passed rain. Quiet, calm waves are transmitted very realistically, it seems that this is not a picture at all, but a photograph. And the sky is the opposite, bright and clear. Volumetric white clouds settled over the sea surface.

In the left side of the picture are still visible clouds. It seems that it still rains there. Against the sky there is a white strip of rainbow. Only barely noticeable colors can be seen on it. There is no typical red-orange-yellow, and the rainbow here is gentle and light, only from below is visible the pale-pink colored strip of the rainbow.

The rainbow ends on a small piece of land. Perhaps from there sailed and the sea. The sailor is dressed in a white loose shirt and brown pants. He swam close on his wooden boat. And when I saw the rainbow, I got up and just enjoyed the beauty of nature.

The artist wanted to show us that the world is beautiful in everything and always. After all, a rainbow is a small phenomenon of nature, but it can also be the cause of someone’s smile. Nikolai Nikanorovich Dubovsky was able to convey the life of ordinary people. All of his pictures are clear and simple, but they make a huge sense. In each of his works Dubovsky conveyed his thoughts and feelings, he always rejoiced when he saw the delight of his work.