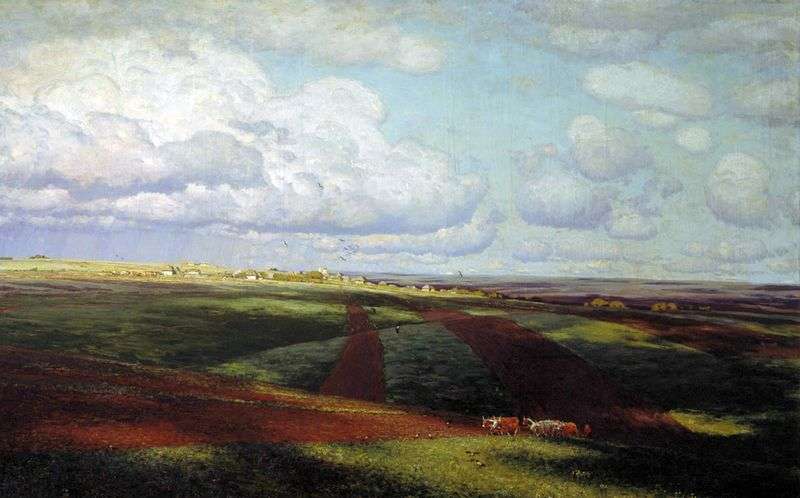 But the “Motherland”, the most significant and large in size artist’s canvas, is not easy to see: it is now… in Siberia, in the Omsk Regional Museum of Fine Arts. In 1911, this painting was exhibited at the World Exhibition in Rome. The fact that she did not go unnoticed there, eloquently testifies to Repin’s letter addressed to Dubovsky from Rome: “This is the best landscape of the whole exhibition of the world, Roman…

You, Nikolai Nikanorovich, I especially congratulate: you have never been so magnificent and powerful – an original, lively and beautiful picture!!! “Of course, one can ignore the opinion of such authority as I. Repin, citing his excessive fervor, such a critic as V. V. Stasov, accusing him of tendentiousness, and other, no less famous figures of Russian culture. It can be done by violating the posthumous will of Pavel Tretyakov not to disunite the collection of works of Russian artists he collected, but to do the opposite. name of what and in what goals? You can not all write off the sloppiness and chance, the more so that they were engaged in this class specialists.

Too obvious is the desire to scatter the legacy of Dubovsky in the cities and cities of our vast Fatherland so that his works can not already unite in one room. Now the works of Dubovsky have been revealed in more than 70 museums.

At first glance, the goal seems to be even noble: to acquaint the viewers of the most remote outskirts of the former Union with the work of the artist. And in fact? In the conditions of total centralization, including in the field of art, the legacy of Dubovsky as a result of this turned out to be turned off from the artistic process. You will not travel around the whole country to make a complete picture of the artist’s work. And now, after the collapse of the Soviet Union, it has become even worse: many of Dubovsky’s works are, in fact, abroad, and access to them was even more limited.