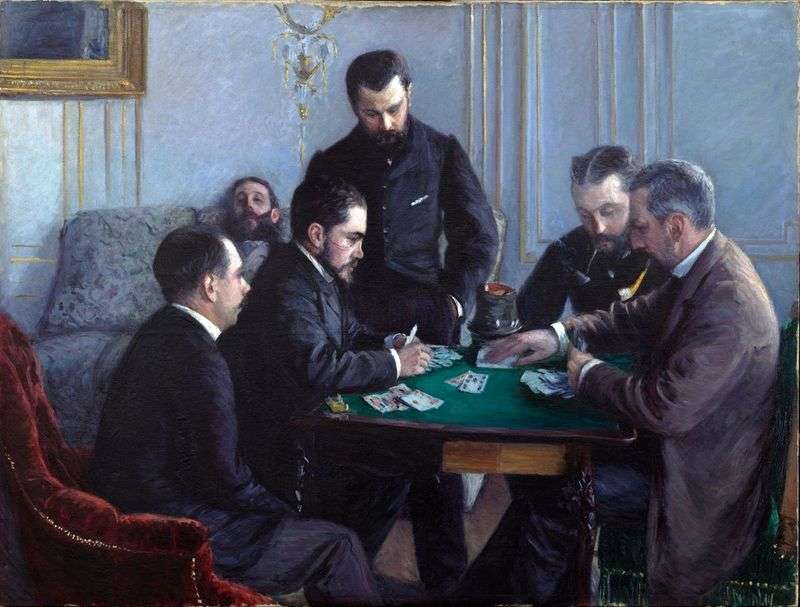 In European painting, the scenes depicting playing cards have a long tradition. Flemish masters created even a separate genre of painting, and in France several paintings on this subject were written, among others, by Jean Simeon Chardin. Zhoris Karl Huysmans draws attention to the similarity of Caillebotte’s paintings and the work of David II Tenier.

But first of all, like Chardin, the artist takes care of conveying the mood of the concentration of men engrossed in the game. Each of them is immersed in his thoughts and does not seem to notice the companions gathered at the same table. This loneliness characterizes the Caybott heroes, regardless of whether the artist places them in the interior or in the open-air scenery.

For the “Party in Bezik” the artist is posed by his brother Marcel and his closest friends. The subjective manner of “stopping the frame” contributes to the realistic expressiveness of the work. At the same time, a complex arrangement of figures indicates a thorough preparation. Caybott introduces here a clear division into two plans.

The person sitting at the wall on the couch, he clearly isolates from the rest: the head of this man is much smaller, which indicates its remoteness. The very space that separates it from the others is not visible, since it is masked by an armchair, table and the players sitting behind it.