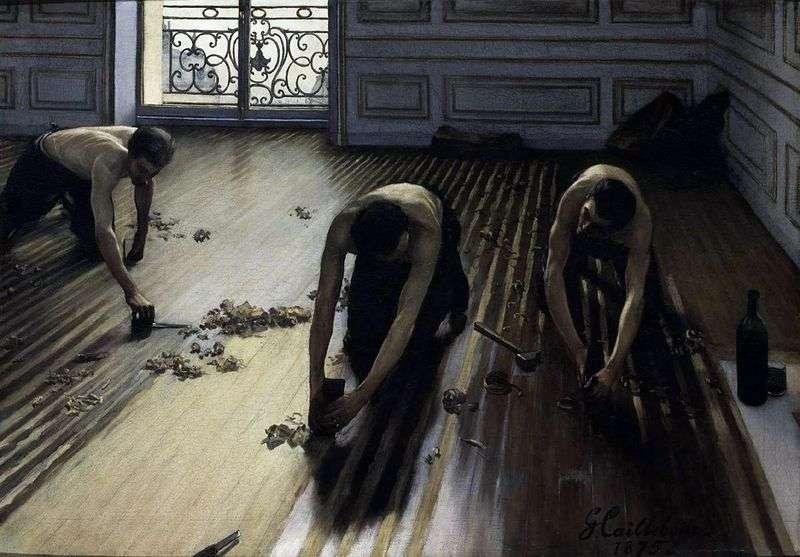 Caillebot differed from his fellow workers in the shop by having a decent condition and therefore worked exclusively in pleasure, not caring at all about selling his paintings. He adored the creative environment. In Paris, on Miromonil Street, he had his own studio. There is a suggestion that it was in her that the artist wrote “The Parketers”.

Despite the refined technique of this painting, in 1875 the jury of the Salon rejected him for his excessive photographic and rough realism. However, this did not stop the artist, and he again exhibited the painting in April 1876 at the Second Impressionist Exhibition. Strangely enough, this time the critics praised her for the absolute reliability of the broadcast of the plot.

It is necessary to give due: at a sight at this picture the impression is really created, that the scene of packing of a parquet comes to life. It seems that the room is filled with noise emanating from the rhythmic movements of the instruments in the strong muscular hands of the workers.

For a long time the picture supplemented the collection of the author himself. And only when it was gone, in 1896 the canvas was transferred to the Luxembourg Museum. Then it changed its location a few more times: in 1929 it was part of the Louvre collection, since 1947 it was kept in the National Gallery of Jé de Pom until finally, in 1986, it fell into the Orsay Museum. Here it is to this day.