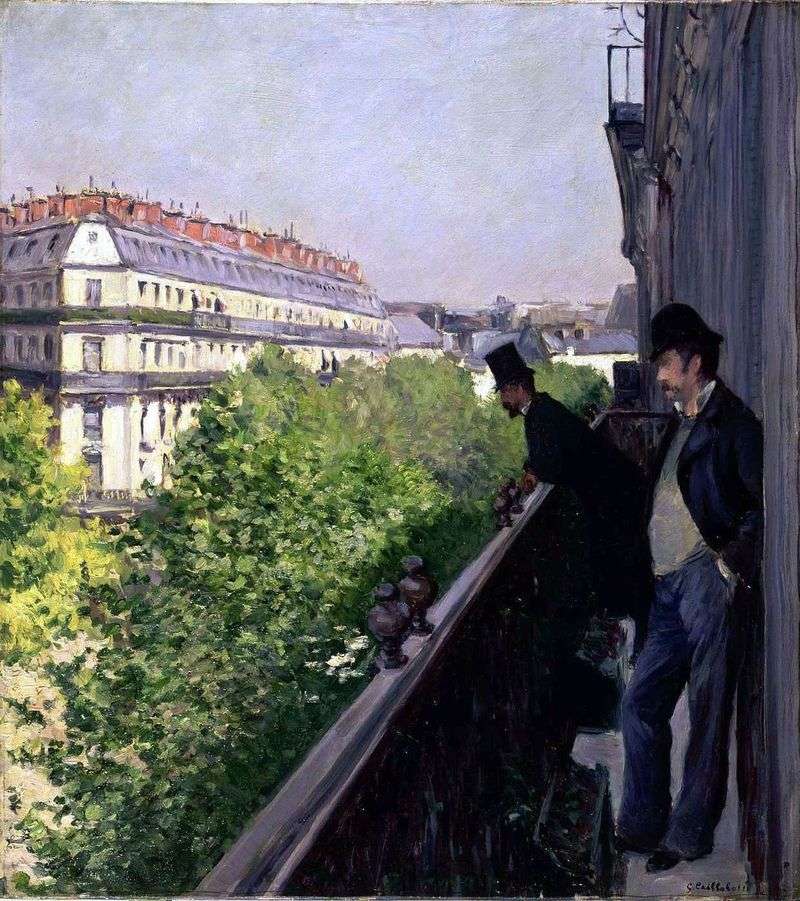 In the second half of the seventies and early eighties, Gustave Cailott performed a series of canvases depicting city landscapes, among which are the panoramas of Parisian streets, seen from the balcony. In these compositions, two motifs that are especially beloved by the artist dominate: a man watching the life of the city and Paris, shown from a certain height. The heroes of Caillebotte are the townspeople, neatly dressed, in a cylinder or kettle on their heads, as if ready to leave the house.

In the painting “Balcony” two such men are looking at the street – this time it is a big Parisian boulevard, “the river of life”, as Guy de Maupassant called it. However, a high angle of view and trees, the crowns of which reach the balcony, do not allow us to see what is happening below. Life of the city is receding into the background, hudolshik rather seeks to portray the loneliness of a Parisian. However, in his canvases there is often a clash of private and social spaces, mutually penetrating or opposing each other. The balcony is the connecting link between them, the continuation of the apartment, that is, the private territory, and at the same time refers to the collective component of the street.

Caillebot uses his favorite spatial solution in the Balcon, based on the diagonal line of convergence, defined by the railing of the balcony. The glance slides along the house and goes deep into the boulevard. On the opposite side of the street, the corner of the house creates an open space on the left side of the canvas.

In this composition, the manner of transmitting light is of primary importance: the bright sun on the opposite facade and the bright glare in the foliage of the trees contrast with the darkened balcony. Feeling of depth, the artist creates an artful use of artistic means. The leaves he depicts small frequent touches of the brush, which is a typical technique of the Impressionists.

The artist also introduces a differentiation between the foreground, where the leaves are conveyed by expressive strokes, and the second plan, on which they have a more blurred character. Monet very similarly interpreted this motive. But the author of “Water Lilies” man’s figure plays a purely decorative role, while Caybotta has the main role. The real theme of this picture are two men.