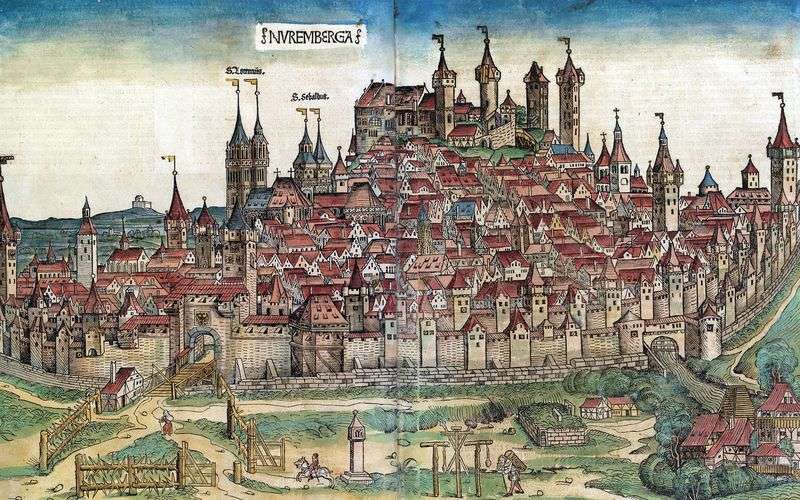 “Nuremberg chronicles” are a richly illustrated edition of world history, based on scientific knowledge and representations of the XV century. Its name was given to this encyclopedic work on behalf of the city where it was created.

In the XV century. Nuremberg was a prosperous city, which was famous not only for its artisans, mechanics, builders, but also for scientists, humanists, artists, poets.

The educated Nuremberg people compared Nuremberg with Rome in this respect, and the Kaiserburg fortress with the Capitol. Humanist Ulrich von Gutten calls Nuremberg “the first of all German

cities to be filled with the best talent and for many years has been abounding with them.”

Nuremberg is very handsome. The Italian scholar Eneos Silvio Piccolomini, the future Pope of Rome, exclaimed in his travel notes: “Nuremberg, what a spectacle, what splendor! What glamor! What nobleness! What kind of government! What is lacking here to be called the ideal of the city? who travels from Lower Franconia and sees this wonderful city in the distance, he will be presented to him in a truly magnificent splendor, which at the entrance through his gate is confirmed by the beauty of its streets and the cleanliness of the houses… “

Since 1500, among the Nuremberg humanists, more and more important role is played by Wilibald Pirkheimer, the closest friend of Albrecht Durer. About his house, which certainly all visiting scientists come, they speak of the Academy.

Pirkheimer had the works of ancient scholars, theological books, humanist writings, the editions of famous German, Italian, and Dutch printers. The library began to collect his ancestors. They began with the manuscripts ordered to the scribes and copied with their own hands. Wilibald Pirkheimer worked at this time on the translations of Lucian Dialogues.

In Nuremberg lived Conrad Celtis – Germany’s first German poet – laureate, crowned with a laurel wreath, as once in Italy crowned the great Petrarch. The scientist-poet, who maintained a permanent connection with the humanists of Italy, dreamed of the emergence of humanistic friendships similar to the Italian Academies in Germany.

And in Nuremberg fulfilled the cherished dream of the famous poet.. Here, inspired by his participation, there was a circle of enlightened people – “Nuremberg Brotherhood”.

In the XV century. Nuremberg lived Hartmann Schödel – city doctor and historian, an educated man who traveled a lot. He collected books, handwritten and printed.

Hartmann Schödel worked on the “Nuremberg Chronicles”. According to his plan, there will be images and descriptions of many German and foreign cities, as well as famous people. Shadel believed that in his “chronicle” you can see not only emperors, kings, bishops, generals, scientists, but even rebels punished for rebelliousness. This book is conceived as an illustrated encyclopaedia.