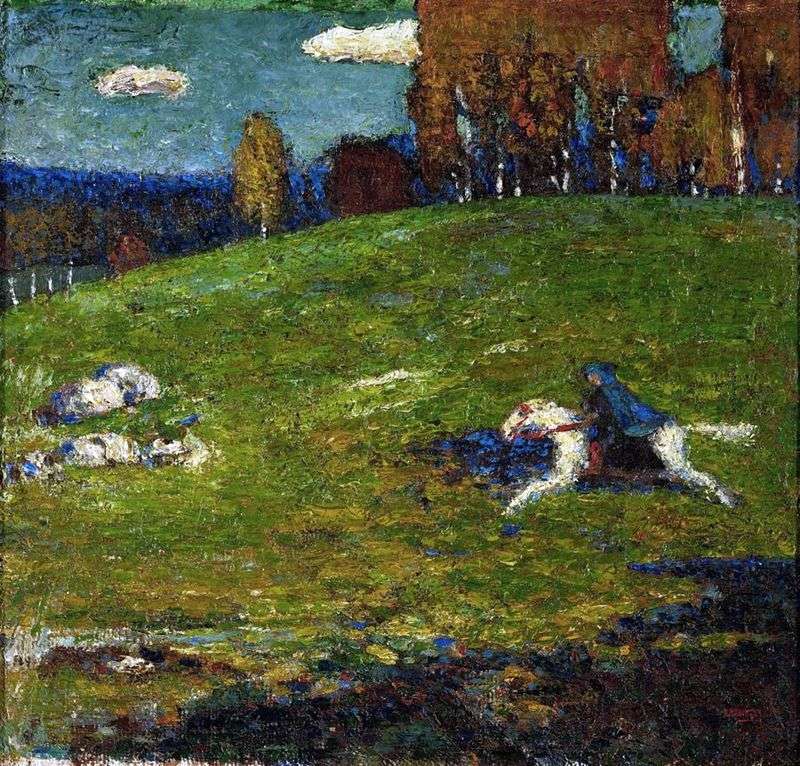 Painting “The Blue Horseman” is a business card, a trademark of the artist. It was written in 1903. At this time a group of young artists released a famous almanac “Blue Rider”. This slightly strange name appeared over a cup of coffee in a conversation between the founding fathers of Kandinsky and Mark Franz. Both loved the blue color, Mark also loved horses, and Kandinsky was fond of horse riding.

The work of the almanac was attended by well-known Russian avant-garde artists Marianna Verevkina, Alexei Yavlensky, Brothers Burliuk, Paul Klee, Gabriela Munter, as well as a number of dancers and composers. The group took an active part in the movement for the renewal of German art of the early 20th century.

Almanac “Blue Rider” becomes an international community. The Russians, the Germans and the French are all united in their desire to create a new art independent of existing rules and canons. They create abstract compositions, applying a set of bright colors, connected visually and ornamentally, looking for associative solutions.

The first exhibition of the association is held on December 18, 1911 in the Tannhauser Gallery in Munich. The pictures of different members of the group formed an interesting exposition, in the search for new ways in painting the authors were very close to each other. Exhibited “running horse” Campendonk, paintings by Franz Marc and other artists, Kandinsky, in turn, presented several abstract improvisations to the court of art lovers.

In March 1912, the second exposition, in which Suprematists, Cubists and other groups of artists also took part. In May of the same year, the Blue Rider published almanacs, where participants provided their reflections on the history and development of painting. The articles are accompanied by illustrations, showing the commonality of ancient art in various parts of the world. The authors pay much attention to the children’s drawing. The Association also adheres to its principle of synthesis of art: several columns are devoted to music.

The last issue of the almanac was in 1914. A year ago the last major exhibition of the association in Berlin was held. When the First World War begins, Kandinsky leaves Germany and that this is the end of the “Blue Rider” period in his biography. When it left the leaders, the group actually ceased to exist. In the 1920s, after the revolution in Russia, Kandinsky returned to Germany, began teaching at the Bauhaus school, where he met some of his old comrades from the Blue Rider. Nevertheless, the association has never been reborn, but it’s a pity…

The painting “The Blue Horseman” brought incredible popularity to the artist due to its simple composition, where the light and color are masterfully combined. The artist creates a contrast between the movement of the rider and the static landscape in the foreground. In this work a lot of expression, movement, it seems that you hear the clatter of hooves and the whistling of the wind…

In the picture, the spiritual goal is not clearly indicated. The goal is the very desire and inner experience of the beauty of nature at the moment of movement. The blue color of the cape of the rider responds in the blue sky and in the dark blue spaces. His white horse echoes with white clouds. The rider merges with nature, he overcame the darkness and gained freedom in a world where light and color triumph.