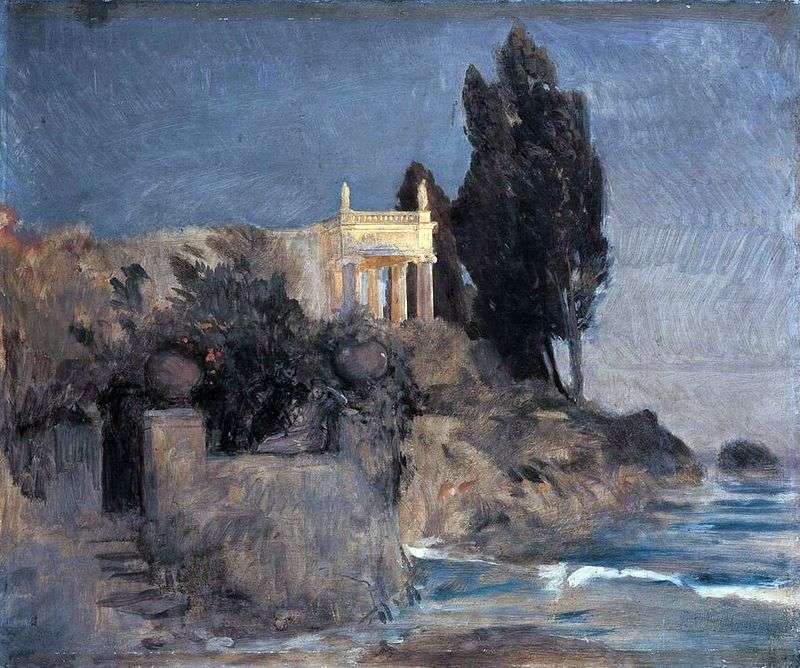 Arnold Beklin is known as one of the largest artists-symbolists of the XIX century. He is the creator of paintings with romantically mysterious landscapes, giving rise to a feeling of sadness and loneliness, emotionally-strained portraits of “improvisations”. The artist was born in Basel, studied at the Dusseldorf Academy of Arts with the famous painter I.-V. Schirmer. In the late 1840s he visited France and Belgium, in the 1850s he lived in Rome, where he became close to the circle of A. Feuerbach.

Later, the artist worked in Germany and Switzerland, and then again visited Italy, where he lived almost ten years in Florence. In the 1850s, Becklin began to write works in which his impressions of Italian nature and classical culture, colored by the romantic perception of the world, were manifested. The painting “Villa by the Sea” was created according to Italian impressions and belongs to the early works of the artist. It is performed in a manner characteristic of the time of plein air painting. Other famous works are Odyssey and Calypso. 1882. The Art Museum, Basel; “Dead island”. 1880. Museum of Fine Arts, Leipzig; “Self-portrait with the violin of death.” 1872. State museums, Berlin.