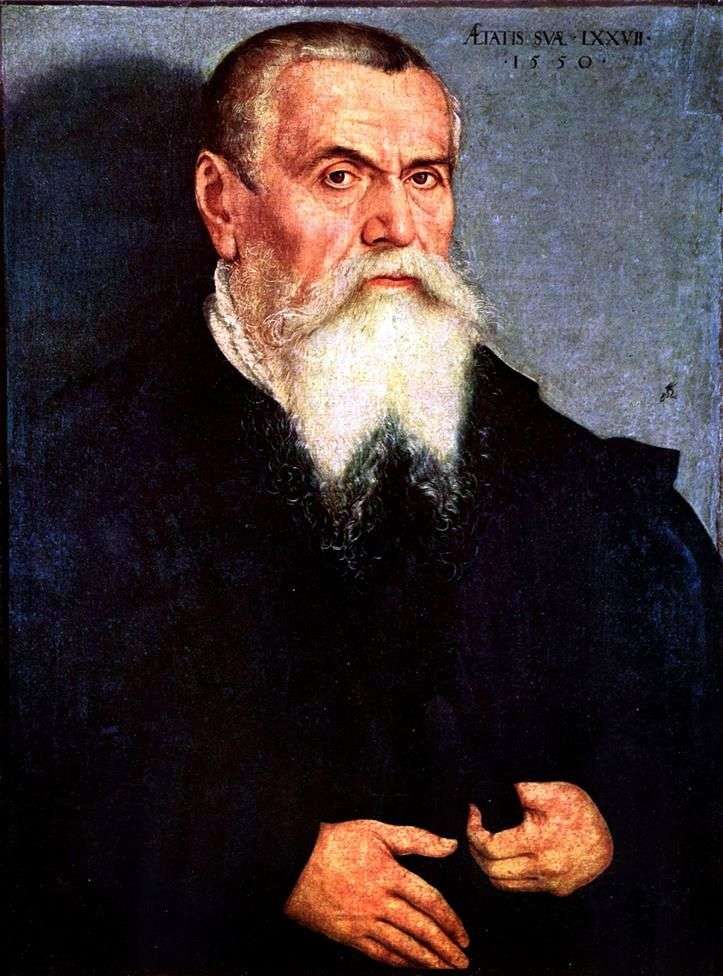 Self-portrait of Lucas Cranach the Elder, portrait created by the artist at the age of 77 years. Actually, the picture is called “Self-portrait for 77 years of life.” Size 67 x 49 cm, wood, oil. The first third of the 16th century was for Germany the period of the heyday of the Renaissance culture, which was taking place in the atmosphere of the intense struggle of classes in the era of the Reformation. The peasant unrest, to which the urban lower strata joined, by the end of the first quarter of the 16th century. grew into a powerful revolutionary movement that seized the vast expanses of the southwestern German lands.

In a number of insurrections, the opposition moods of chivalry and the burgher population of cities have found their way out. A number of remarkable personalities put forward a revolutionary upsurge. With the names of the heroic leader of the peasant revolution, Thomas Münzer, the leaders of the knight uprisings of Franz von Sickingen and Ulrich von Hutten, the head of the German Reformation Martin Luther is linked one of the most striking pages of the history of Germany. Experienced by Germany in the first quarter of the 16th century, the revolutionary struggle was of great importance for the comprehensive development of German culture. During this period, the country experienced a high spiritual uplift. Revolutionary ideas, generated by the growth of people’s self-consciousness, moved forward science, philosophy, art, painting, engraving.

The beginning of the 16th century in Germany was marked by the flourishing of humanism and secular science, directed against the survivals of feudal culture. The interest in antiquity, in ancient languages grew. All these phenomena took in Germany peculiar forms. There was not that sequence of philosophical views that the Italian thinkers led to an unconditional belief in the human mind. The presence of the theological principle was felt much more strongly; there was much more confusion, inconsistency, inconsistency of concepts. In the first quarter of the 16th century, the most successful period of the work of the German painter Lucas Cranach the Elder took place. The artist Cranach was on friendly terms with the leader of the Reformation Martin Luther, illustrated several of his works, so the artist’s work reflects this period of German history quite fully.

About the early years of the artist’s life, it is only known that in 1500-1504 he was in Vienna; in 1504 he was invited Cranach to Wittenberg to the court of the Saxon Elector Frederick the Wise, and then until the end of his life he worked at the court of his successors. In Wittenberg Cranach in the position of a prominent rich burgher, has repeatedly been the mayor of the city, was the head of a large workshop, a vast number of works, so that at the present time is not always possible to identify the original paintings of the artist.

Especially great place in the pictures of Lucas Cranach is nature; along with Altdorfer, Lucas Cranach can be considered the ancestor of the art of the landscape and Germany. Attention to nature is peculiar to the master, starting with the earliest works that have come down to us. The decisive role is played by the landscape in his famous Berlin painting “Rest on the Way to Egypt,” 1504. Here, perhaps, Cranach most vividly depicts the nature of his native Germany. The northern forest, which closely surrounds Mary and the baby and Joseph, who settled in the blossoming glade, is truly depicted. Like Altdorfer, Lucas Cranach lovingly conveys all the details of the landscape – trees, flowers, grass. He introduces the elements of the genre narrative into the interpretation of the evangelical legend, putting aside the religious content to the background.

From the traditional methods of artistic interpretation of the church plot, the artist retreats in the “Crucifixion” of 1503. Extremely entertaining are the creations created by Lucas Cranach on wood and copper, reproducing scenes from the life of the court society of Wittenberg.