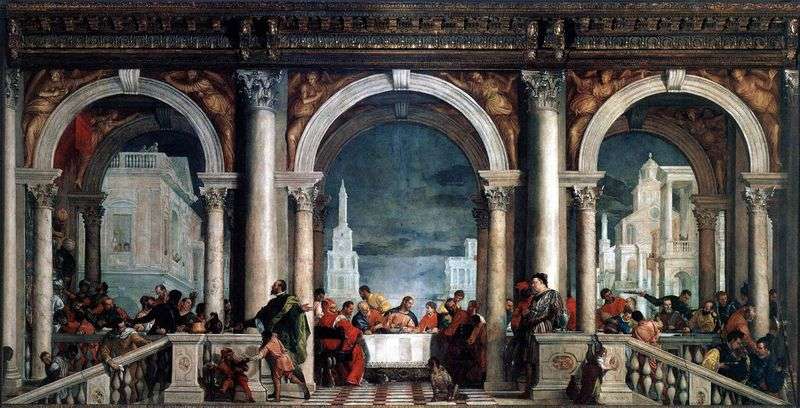 Master of magnificent large-scale paintings, Veronese decorated with his works many secular and religious buildings in Venice. The “feast in the house of Levi” was written for the refectory of the Dominican monastery of Saints Giovanni and Paolo.

Researchers suggest that the original picture was created on another plot. There are different points of view on which one: “The Last Supper”, since the place of the work was formerly the “Last Supper” by Titian, who died in the fire, “The Feast in the House of Simeon” or some other feast.

At the end of the work, Veronese was called in for questioning the Holy Inquisition for an excessively free interpretation of the evangelical scene, inappropriate heroes and unnecessary details that did not meet the strict policy of the Catholic Church associated with the counter-reformation. After that, the master was given three months to rewrite the canvas, but instead he only renamed it “Feast in the House of Levi,” not so sacred in the evangelical scene. Veronese is known for his crowded paintings depicting biblical feasts and meals.

This composition represents the quintessence of his search in this direction. Inscribed in the classical architectural decoration in the form of a triumphal arch, inspired by the classic works of the then popular Andrea Palladio and Jacopo Sansovino, it as if opens a theatrical action to the viewer, played out against the backdrop of a painted backdrop.

A rich palette of bright colors “describes” a motley crowd of characters, among them – Turks, blacks, guards, aristocrats, buffoons and dogs. In the center of the canvas is the figure of Christ, given in contrast to the others against the sky, she stands out among the participants in the feast with her gently pink tunic. From the artist does not slip any detail! Judas not only placed him on the other side of the table from the Teacher, but also forced him to turn away. His attention is distracted by a negro servant, pointing to a dog that is watching a cat playing under a table with a bone.