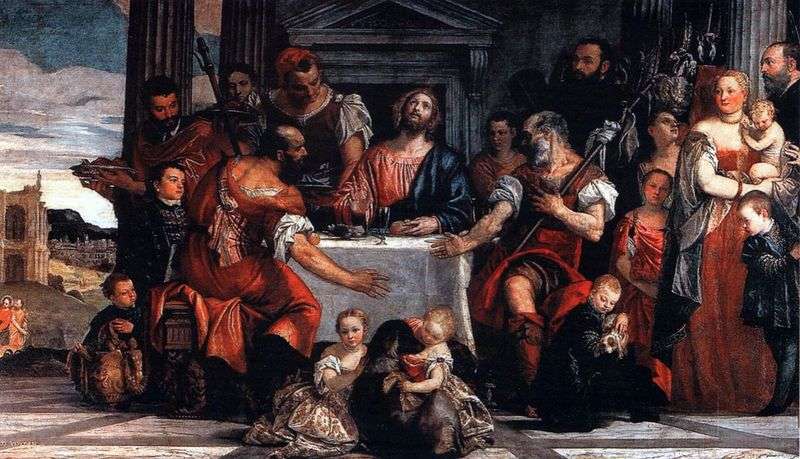 According to the Gospel of Luke, the first time the risen Jesus appeared to two disciples who were going to Emmaus. But their eyes were withheld, and the disciples did not recognize Him. When they came to Emmaus, Jesus wanted to leave, but the disciples asked Him to stay and have supper with them. When Jesus took bread, blessed him, broke it and gave it to the disciples, they opened their eyes and they recognized Him. And at the same time, Jesus became invisible to them.

The painting “Christ in Emmaus” is very characteristic for the work of Veronese. Epic in size, it abounds in household details, reducing the biblical story before the life of the colorful life of the Venetians. The composition and everything depicted bear the brilliant charm of the theatrical scene created by the most skilful props.

On the terrace of the luxurious patrician house, surrounded by its owners and two of its disciples, is a resurrected Christ. On the canvas, apparently, is the moment of recognition of Christ by disciples. These main characters of the narrative are clearly highlighted by the artist from the environment, they are focused on. But this does not interfere with the author with the attention of an experienced bytopisatelya tell us about the beautiful architecture of the house, and a thin glass of wine, and the bread that is about to break Christ.

In the foreground are two lovely little girls with a dog. The picture in general abounds with children of different ages, from the baby in the hands of a young woman in red to a boy, almost a young man standing behind Christ. Portrait portraits of some characters present in the picture can be found in other works of the artist. Apparently, the models were authored by well-known people. Thus, in the features of a woman standing with a child, one can guess the beautiful Nani, whose portrait is also kept in the Louvre.