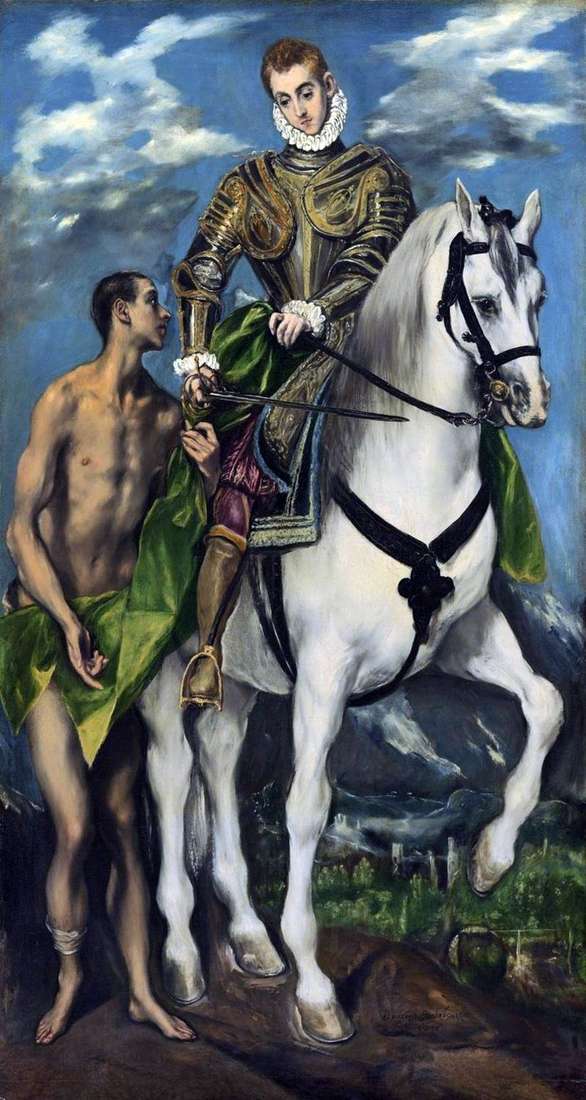 Painting of the Spanish painter El Greco “Saint Martin and the Pauper”. The size of the picture is 193 x 103 cm, canvas, oil. Saint Martin of Tours was born in 336 in Lower Hungary, was raised in Pavia; at the behest of his father, the military tribune, was to enter the ranks of the army and here, while still being announced, was famous for his virtues.

A tradition is especially well known, as Martin, seeing a half-naked beggar, cut his cloak in half and gave him half, and for that night was delighted with the apparition in the dream of the Lord Jesus Christ, clad in the same half of the cloak

and who said: “Martin clothed me with this cloak” . After accepting the baptism, Martin left the army, gave himself under the spiritual leadership of Gilary Poiatiesky and turned to exorcism.

In order to convert his parents, he made a difficult journey to his homeland, but only his mother managed to convert him. Both there and in Milan, Martin was persecuted by the Arians. In 361, Martin of Tours founded the first correctly organized monastery in the West near Poitiers in the West.

His sermons and conversations were simple and uncomplicated, abounding in parables; often he referred to the visions he had of heavenly powers or evil spirits. Tempted by the devil, telling him that those who sinned after baptism will not be forgiven, Martin exclaimed to him: “Even if you, unfortunate, repented of your evil deeds, I fearlessly would promise you mercy, with full trust in Christ.” Residents of the Tour almost forcibly forced Martin to take episcopal power over them.

Turning the pagans, Martin broke their idols, cut down the sacred trees, built churches and monasteries. He himself continued to lead a modest monastic life, lived first in the cell, then built himself a hut on a high rock, on the banks of the Loire; soon there arose a whole monastery, the famous Marmoutier. The gentle Martin was alien to all violent actions: he stopped talking with those bishops who persuaded the emperor to execute Priscillian. Martin died in 401.

Bishop Perpetuy erected in Poitiers above the tomb of Martin a magnificent basilica. Since that time, the fame of Martin, whose distribution was strongly promoted by his biography of the saint, his disciple Sulpicius Severus, began to grow even more. The story of the cloak of Martin gave a grateful object to medieval art, and expressions like “Martin’s Mass”, “the summer of St. Martin” came into everyday life in the West.

Kappa of St. Martin served the Frankish kings as a banner, without which they did not march. Martin Tours was considered the patron of France, Mainz and Würzburg. The miracles that Martin created after his death are reported by Grigory of Tours. The festival dedicated to St. Martin at the end of autumn was combined with many pagan rituals in the West, mainly with the autumn holiday of Wodan. Hence the origin of Martin’s lights and Martin’s feasts, with the obligatory “goose martin” and the breakdown of young wine.