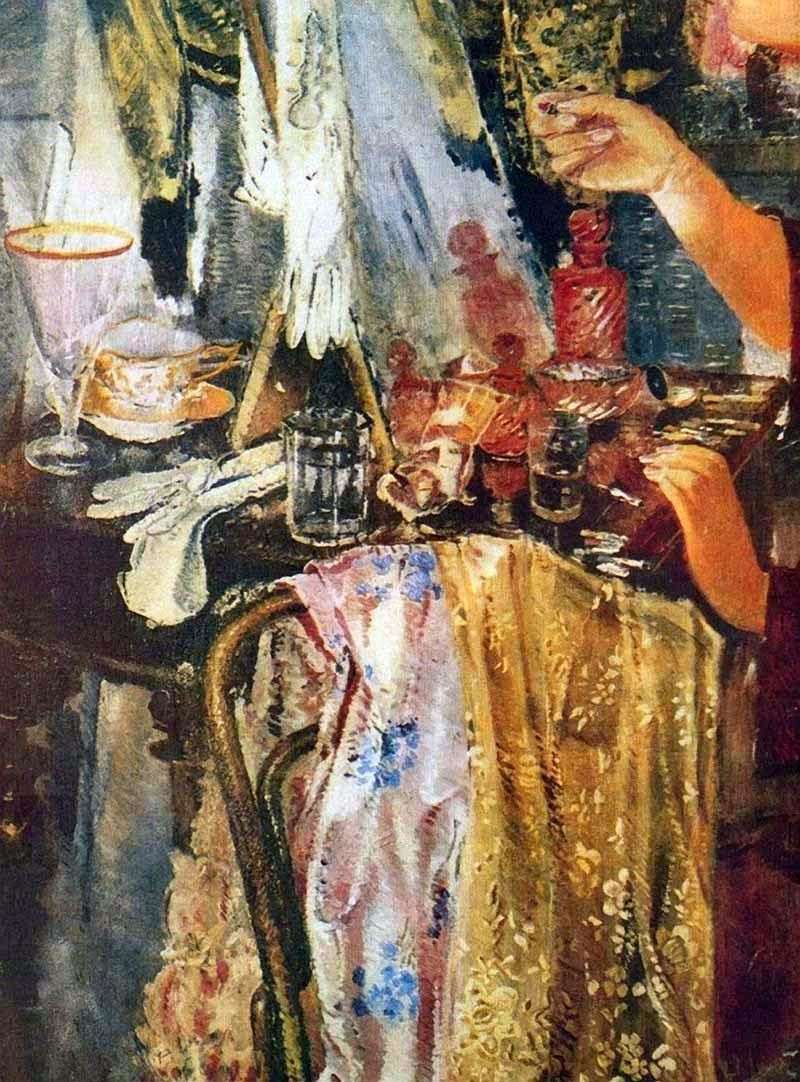 Pimenov – impressionist, and, like all his colleagues, puts at the forefront moment. A shining moment that holds the whole world and many meanings. Like most impressionists, his paintings are very cheerful, very light, catch some seconds from the lives of ordinary people in their frozen eternity and show them to others.

“Actress” – an excellent representative of this genre. On it is a motley, iridescent mess in the actress’s dressing room before the performance. A cup of tea or coffee, a high glass of wine drunk after yesterday’s premiere. White gloves. A bottle of perfume.

A stage costume casually thrown over the back of a chair – a golden, bright, eye-catching look. Of course, here is a mirror, without which it is impossible to make up correctly, here, too, jars with makeup are lurid, scattered around the table in disarray. From the actress herself in the picture, the hands and part of the chin, but already from them you can see how expressive her image is. She is leaning towards the mirror, meticulously looking at herself – isn’t it necessary to add something? From all this – from objects, from the movement of a woman, whose face we don’t even see – there is a feeling of theatrical excitement, running around behind the scenes, and last preparations.

Soon to go on stage – they will give a third call, the curtain will crawl upwards, and again it will be time to become someone else, not myself. The audience will applaud, flowers will fly to the stage.

The replicas will be forgotten and immediately remembered, and against their will, when looking at the picture, the viewer begins to guess – what is being put on in this theater today? Who is the woman playing today with full elegant hands, and whose suit is hanging down from the back of a chair? Would she applaud her? Will the hall stand in unison to reward her for the game? How did she come to this and did she always want to become an actress? As it was intended – in one moment – the whole world.