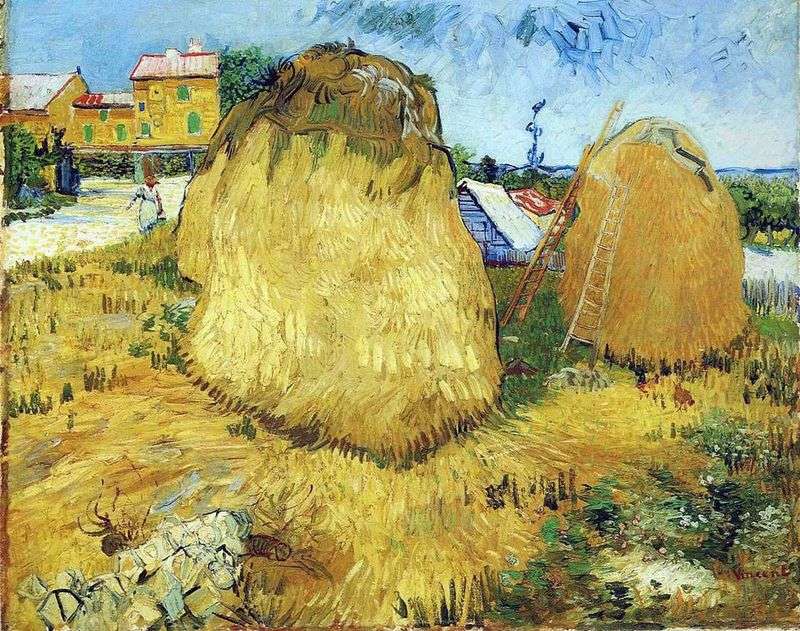 Van Gogh, living in Arles, almost always painted in the open air. One of his favorite subjects was the wheat fields in the vicinity of the town. Sometimes he wrote their wide expanses, stretching to the horizon, and sometimes chose for the plot a separate small section.

In this painting, written in 1888, Van Gogh painted two haystacks. Massive forms of sheaves are represented here close-up, filling almost the entire space of the canvas. In the background there is a road with a peasant woman walking along it, and on the horizon there is a house, the color of which practically does not differ from the color of dry hay.

Coloring paintings based on a combination of pastel tones. The pure blue sky brightens the yellowness of wheat, which in the foreground acquires a rich brownish hue. Among the remnants of yellow ears, here and there on the ground are islands of juicy green grass. Yellow color was the favorite color of the artist, and in this picture he is noticeably predominant.

Fortress Stogov Van Gogh emphasizes vigorous strokes of various shapes and configurations. The ears sputter, as if trying to escape from the form given to them by people. The dark contours of the stacks and houses, the chaotic imposition of smears impart a touch of drama to the picture.