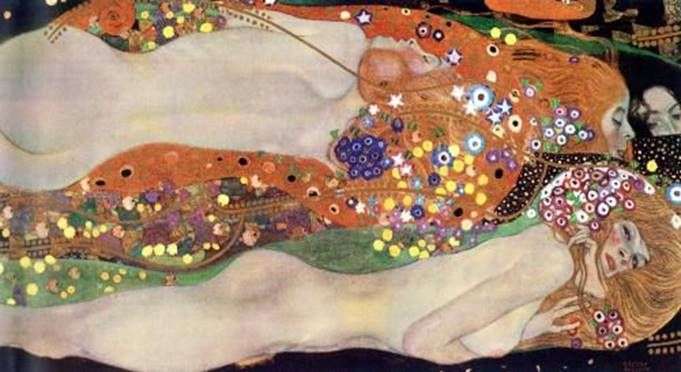 Gustav Klimt – one of the brightest representatives of Austrian Art Nouveau – had in his arsenal many techniques to enrich the supply of his own paintings. Thanks to the talented possession of various materials in the compartment with oil, his work was different every time, like a new confectionery dish. In this list there were also explicit drawing sketches with women in depraved poses, an unusual combination of different materials, mosaic, oil and gold leaf. The use of the golden framework in paintings marked the whole period of Klimt’s work as a “golden period”. The picture “Water snakes” presented to the spectator was written exactly in the “golden” section and is a continuation of a small series of paintings with the same name. Specifically, this work has the serial number II.

“Water snakes” – a vivid example of the era of Art Nouveau and a kind of visiting card of the author, however, like other works. As usual, Klimt wrote the animals humanized, turned into women. It’s not just snakes, but real girls with bodies, beautiful faces and shock hair. A lot of female snakes are gathered in long garlands – someone floats down the river, another, a burning brunette – swims against the water. They are pale and covered with spots, like traces of rubbing, rough skin. Perhaps, due to the infantilism of the snakes themselves, eternal hibernation and laziness, lying on the bottom? Klimt gave his women a cold beauty and Slavic features. The only decoration of each was magnificent head of hair with a sprinkling of shells and colored stones, algae of unearthly origin, stylized by the artist.

The work breathes bright sugary color with a taste of sea cabbage, the one that lay down a soft layer between the beauties. The stylized image of snakes gives Gustav the unrestrainedness and his craving for nude texture. Sensitivity to the female beginning reveals the author’s sexual inclinations and the need to contemplate, mold his own woman.

Restlessness in the colors of Klimt is expressed in “Water Snakes II” with a multicolored palette, contrast and decorative. Considering the dimensions of the canvas, the author demonstrates here a sense of space, an excellent layout and the filling of voids. The multilayered details destroy the boredom that could live in the narrative of the life of the marine monasteries, and their incarnation with women – even more so.