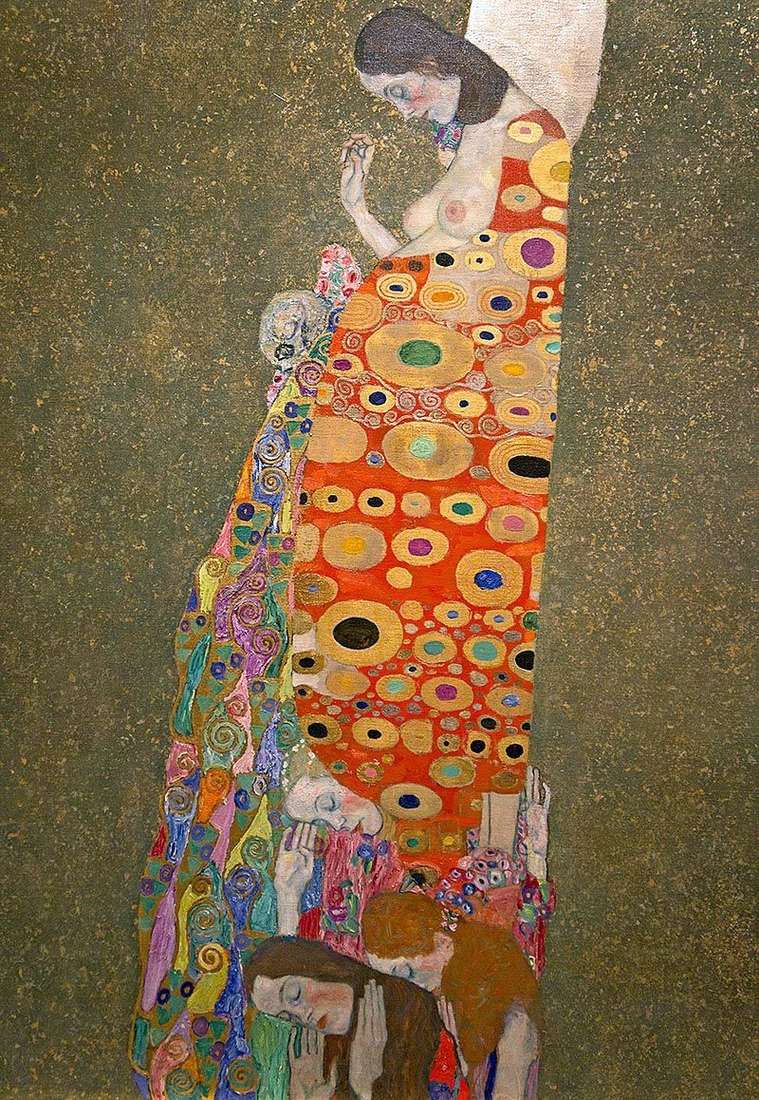 The famous artist Gustav Klimt is one of the founders of the Art Nouveau style in Austrian painting. They created a society of artists “Vienna Secession”, made up of young artists who crave for freedom of style. Secessionists did not adhere to any one genre in their works, there were a lot of them.

At the time, Klimt created the picture “Hope”, which was very unusual, but later he created a duplicate of it, which he called “Hope II.” Both paintings had a similar symbolism, which showed the existence of life and death. The new painting was performed in a slightly different

style, unlike the first one.

In the person of the heroine of the picture you can see sadness and sadness. The girl’s dress is made by the artist in his own style, which he used in most of the paintings written in his “golden period”. The image of the faces of women on the hem of the palantine symbolizes the inner experiences of the heroine.

Life and death on this canvas exist simultaneously. The picture is made in bright and warm colors, but the soul of this girl is aching with pain. Klimt well shows the transition of joyful colors in a sad image. The skull, located on the belly of the heroine, blocks the path of happiness that goes to her. Looking at this, there are thoughts about whether this child’s child will be born or not. The artist specially introduced the symbolism of death into the picture, so that no one will forget about the reality of this world.

Gustav Klimt has a scandalous reputation among critics and society. His love for women is a fact not unknown. Any person, having looked through all his pictures, can draw such a conclusion, since most of his pictures are images of women. Many pictures are filled with eroticism. At that time the society had other views, and the themes of his paintings caused a storm of scandals and negative reviews. But despite all this there were true connoisseurs of his creativity and he won great popularity, due to which he received many expensive orders.