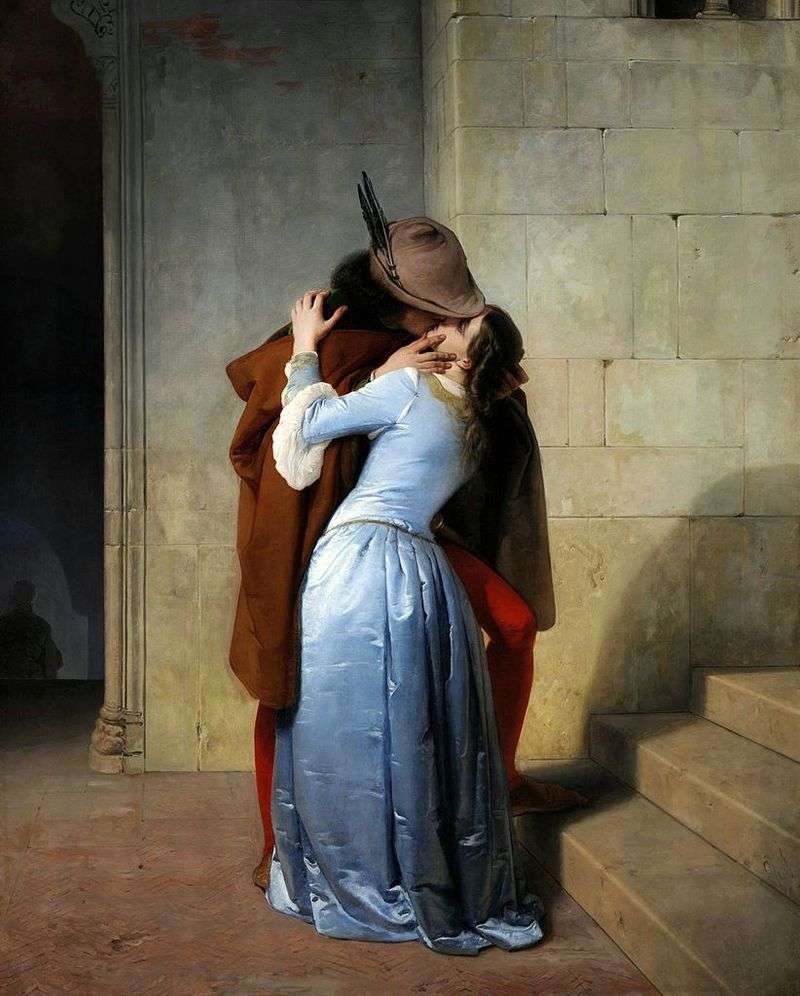 Aietz Francesco, an Italian painter, a representative of Romanticism, who worked mainly in Milan. The basis for learning the artistry of painting Hayes was in Rome at Canova and Engr. His name throughout the XIX century was the focus of the artistic community.

The painting is written in the style of Italian Romanticism. There are three copies of this picture, two of which are kept in private collections, and the third, where the woman is wearing a white dress, was written in 1861 for the family Mylius and sold on November 12, 2008 at Sotheby’s auction in London for 780,450 pounds sterling.

Ayez considered the “Kiss” one of his most important works. In it he tried to combine such properties of Italian romanticism as naturalism and close attention to sensual love, with the ideal of Risorgimento – patriotism. Kissing couple is an allusion to Romeo and Juliet Shakespeare, as well as to Renzo and Lucia from Alessandro Manzoni’s novel The Betrothed. Clothes heroes and architecture indicate that the scene occurs in the Middle Ages, but a completely new iconography of the picture and its patriotic message convince the viewer in its modernity.

It was necessary to have considerable courage that in the 1820s, when the carnarians were arrested and many of them were forced to emigrate from the country, writing pictures on subjects that were protesting against tyranny, freedom-loving ideas were expressed. Patriotic content was seen by contemporaries in the canvas “Kiss”. The farewell of the heroes, dressed in costumes of the XIV century, was regarded as an allusion to the scene of the forced flight of a young Italian patriot – carbonarius.