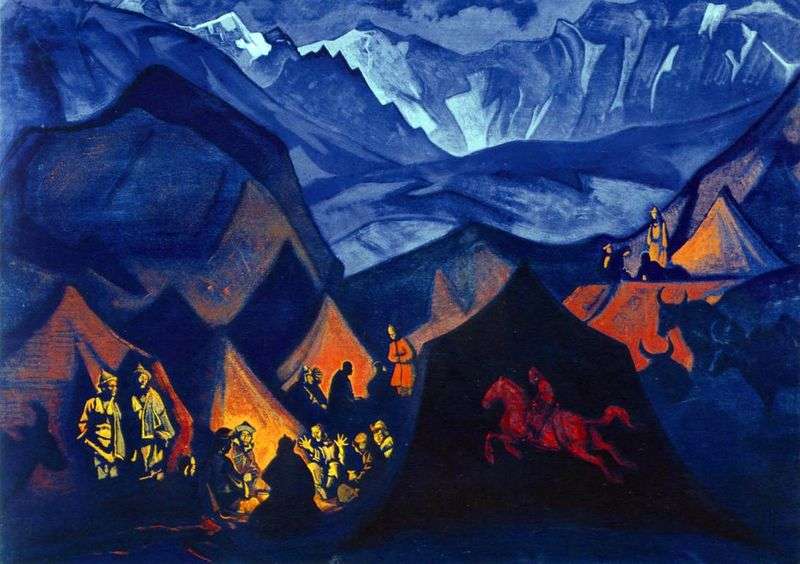 Honoring and waiting for Buddha Maitreya, but no longer “in secret caves”, but in friendly conversations among caravan drivers at the sites, is the theme of the “Whispers of the Desert” picture.

In it, Nikolai Konstantinovich captured one of the scenes most often encountered during the journey, described in the expedition diary: “High sharp rocks surround the camp. Giant shadows were cast on their smooth surfaces. Around the lights you see swathed figures. From afar you can see how they raise their hands, and all ten fingers glisten in the red streams of fire. Something is said

with enthusiasm. The vast army of Shambhala is considered… “

In the blue of the night, at the foot of the mountains, near the “fires of the world” gathered caravan. Among them, Ladakhis, Tibetans, Mongols, and everyone, as Roerich writes, has his own story, worn out in the silence of the desert.

The flames illuminate dark-skinned, weather-beaten faces, individual figures, immersing peaked tents in the inky shadow, repeating the silhouettes of rocks dormant horned yaks. All of this, combined with the ghostly moonlight flooding the distant mountains, creates an amazing, fantastic picture, reminiscent of the scenes of Bosch and Bruegel the Elder.

By fireflies “fireflies” – chatter, laughter, whisper. Quiet, leisurely conversations. Everyday life topics are interspersed in them with stories about the innermost. They talk about the miraculous Stone, the countless warriors of Shambhala, the triumph of justice over evil… And as a sign of the expected miracle, a fiery horseman on a red horse appears on the black background of the tent.