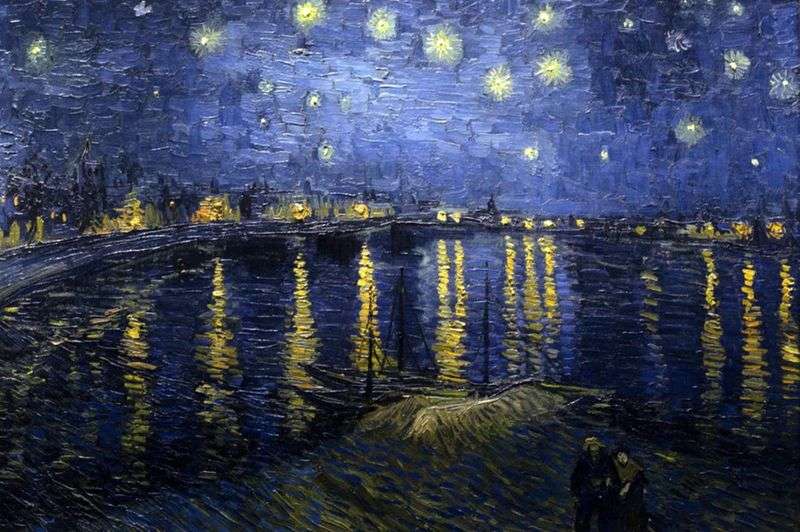 This painting was painted by Vincent Van Gogh in 1889, he painted this painting for a year. The work is done in large and voluminous strokes, this is the artist’s favorite technique. “Starry Night over the Rhone” is made in dark, mostly blue, colors, changing into hundreds of different shades and combined with the yellow-gold color of the stars and lights of the city.

The main object of the canvas, of course, is the night sky. The viewer can observe with a naked eye a big bear and polar star in the sky, thanks to which you can accurately find out which side of the river the artist painted

this landscape. Closer to the center of the picture, the dark night sky looks lighter. The stars are depicted by the artist as very bright and large, their shape resembles small fireworks.

In the background is another bank of the river, on which stands a large and dark city, the outlines of which almost merge with the sky. The city is brightly lit by lanterns that look like stars. Lanterns are located close to the stars, and their colors contrast strongly, the lanterns are much yellow. The glow emanating from the lanterns is reflected in the watery surface of the river with long, bright stripes.

When the viewer first sees this picture, his gaze immediately rises to the sky and the river, and only then he notices that an elderly couple walks carelessly along the near shore. They slowly walk arm-in-arm on a wet beach, and near the shore they quietly expect to sail three small boats. This picture pacifies, brings to good thoughts.

Van Gogh was very fond of the dark time of the day, during his life he painted several night landscapes, and he wrote them right at night from nature, highlighting the easel with a candle. He was fascinated by the beauty and mystique of the starry sky, he dreamed a lot, looking at them. He also portrayed the stars in Starry Night.

The artist often thought about death, but could not comprehend this topic. So unreachable were the stars for him, so he decided to portray them, putting his thoughts and emotions into his works. Since the creation of these paintings many decades have passed, but they still fascinate viewers with their beauty.