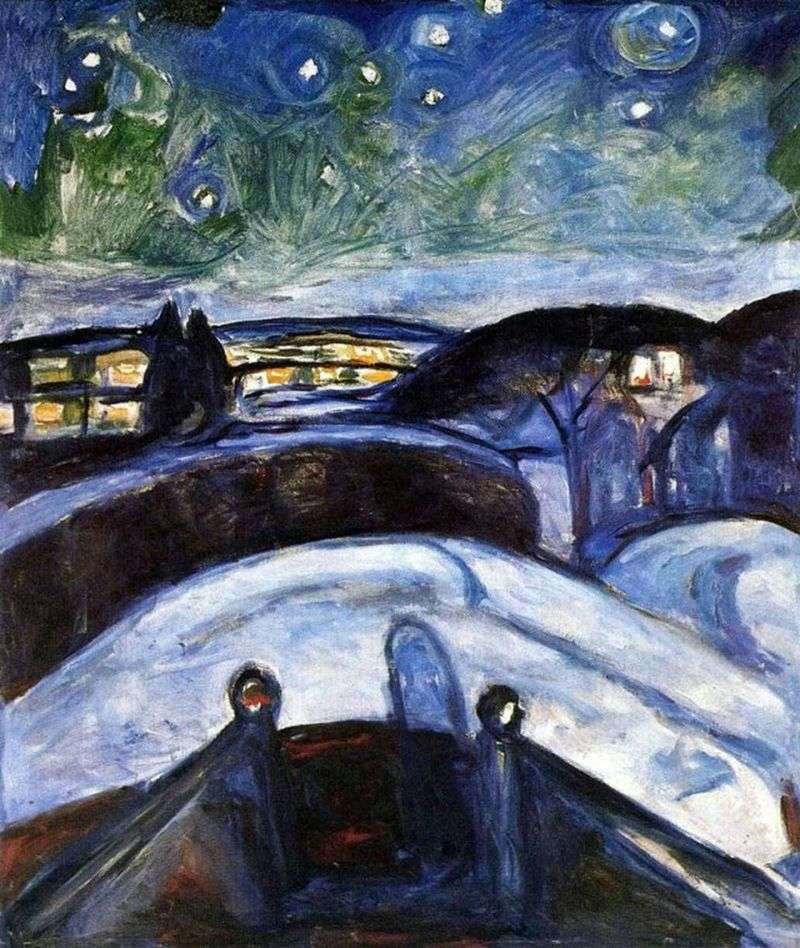 Stars always attracted Munch, served as a mysterious object of his creative worship. He wrote several paintings united by a common theme. One of them is “Starry night”. More precisely, not one, several of them. Munch had one feature – to write his canvases in different variations. It happened with this picture.

The “starry night” of 1922 was captured on a moonlit winter night. This view was familiar to the artist, as it is the sky from the window of his house. But this did not diminish Munch’s love for the mysterious starry sky.

This is expressed in the way the author prescribes the details of his creation: the drifts under his feet are marked carelessly, without much care, but the sky with twinkling stars captures the eye completely.

At the same time, Munch does not seek loneliness. He fills the picture with light coming from the windows of distant houses, which adds some warmth to the plot. It is mixed with moonlight, and this fusion is the basis of ghostly and mysterious. The prevailing blue color and bright green explosions in the night sky add vitality and emotional openness to the work.

One feels that the artist did not aspire to the brightness of experiences, prescribing the world around him in the picture. From her rather breathes calm and sincere, makes you think deeply about the strangeness of life. Despite the seeming simplicity and childish manner of writing, the true connoisseur understands that the picture was made by the hand of a master, professional and genius.

All his life, Munch, from the words of his contemporaries, belonged only to art. He did not have a personal life. In addition, after a series of failures, Munch overtook a depressive psychosis, from which he was treated for a long time in a specialized hospital. Talent Munch certainly admitted, despite the state of mind. The artist died in his own chair with a volume of Dostoevsky in his hands.