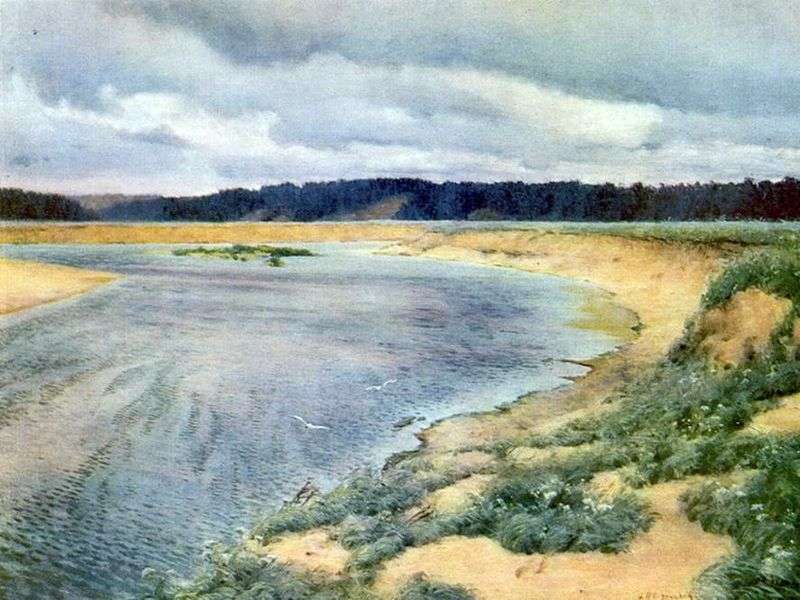 Top creative achievements of the artist. Panoramic landscape in which the artist managed to create a monumental and at the same time characteristic image of Central Russian nature on the basis of a modest motive. The picture was exhibited at the XIX exhibition TPHV and was acquired by Tretyakov, who considered it the best in his collection.

The painting depicts a river bending under the open sky. The forest in the distance is represented as a dark mass. In the foreground there is a sandbar overgrown with grass with rare white flowers. Brightly visible ripples on the water from the north wind called “siverko”. The sky is especially plausible – with tall clouds in gray tones. Away islet. Silence. No people, no buildings. Spill of the river gives the impression of its priority over the terrain. The original corner of Russian nature is depicted “surprisingly true and modest.”

The priority of dark tones in the picture – a dark sky and its reflection in the water, a dark forest – creates a sense of the inevitability of an ongoing and impending storm. The philosophical and poetically gifted landscape depicts the climax of the confrontation of natural forces.

Experts believe this picture is perhaps the only real success of I. Ostroukhov in art. It expresses the whole range of feelings, which covers a person when he collides with nature.