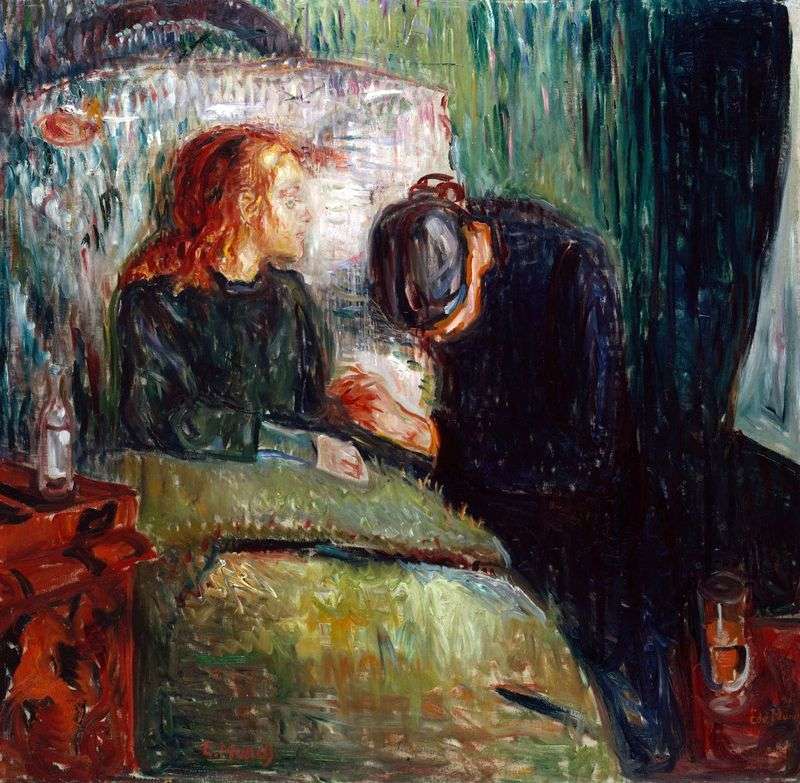 In Norwegian painting of the eighties of the 19th century, the “childish” theme is very popular, most often artists choose the motifs of a suffering, destitute or sick child. However, when in 1886 Munch’s painting “Sick Child” was presented at the Autumn Exhibition of Christiania painters, she unexpectedly caused a flurry of unflattering reviews: the artistic public was outraged not by the choice of the theme, but by the method of its embodiment on the canvas. Munch’s painting style caused shock even among well-worn critics, who were familiar with the experiments of the French Impressionists.

The artist demonstrates a very original texture of the letter, completely covered with small scratches, which he applied with a knife or spatula to the paint layer. And each new layer contains more and more intense and deep “potholes”, indicating the increasing emotional stress of the author in the process of working on the picture.

If the critics knew about the personal tragedies that Munch had to endure in his youth, they probably would have treated the author of “The Sick Child” more humanely and would not have accused him of “deliberate, physical dramatization of the motive”. After referring to the topic of a child dying away from a serious illness, the artist mentally returns to a terrible time, when his beloved sister Joanne Sophie, who died of tuberculosis in 1887, slowly disappeared in front of his eyes.

This deeply intimate and restrained scene is executed in muted grayish tones. The pale skin of the patient’s face, framed with reddish hair, seems almost transparent against the background of a large white pillow. The dress of the girl and the cape on her lap reinforce the “passive” sound of the picture. The sadly bent figure in a dark dress almost merges with the background, symbolizing withering and death.

From the later works of Munch, this canvas is distinguished by its commitment to realism, although here too there is a noticeable interest in the inner feelings of a person, and not in his appearance.