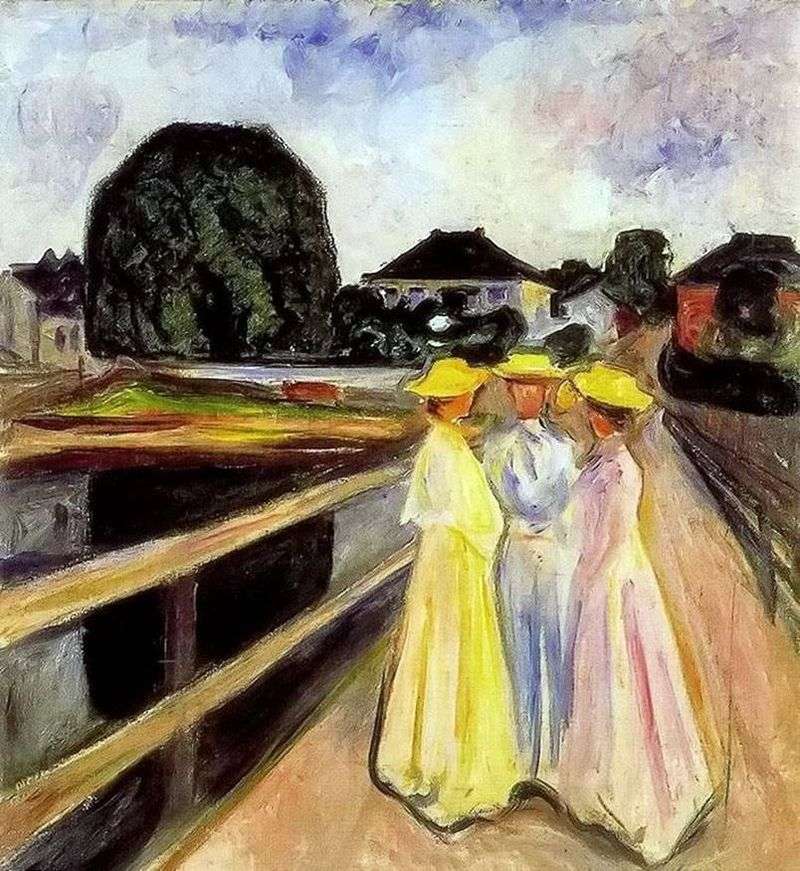 To his favorite motives Munch returns all his life. The painting “Girls on the Bridge” is one of the eighteen pictorial versions of this theme, created between 1899 and 1935. The scene of the girls’ meeting is invariably played out on the bridge connecting the shores of the Oslo fjord. If someone visits this place in our time, he will notice that since then nothing has changed there. Above the fjord, he will find the same bridge, behind which the same road stretches upwards, getting lost among the same houses, covered with the shadow of all the same age-old lindens.

The painting, dated 1935, is compositionally reminiscent of previous versions, from which, however, it is radically different from a formal point of view: here the artist uses a completely new, atypical color gamut for himself. The figures are circled in a dark outline. The embodiment of the main motive close version of 1903. The huge green crown of linden is reflected in brownish water. Rich colors and mysterious, but at the same time, calm atmosphere reveals the characteristic style of the master.

The 1902 version also presents a landscape with a high horizon, which, however, is almost imperceptible, since Munch “smashed” the overestimated horizon line with the figure of a young woman, presented full face and with a calm smile moving towards the viewer. This central figure carries an important functional load from the point of view not only of the composition, but also of the emotional structure of the picture: it creates a special cheerful mood, emphasized by the delicate blue of the dress.

The fact of creating 18 variants of a painting representing women or girls on a bridge can be explained by a variety of circumstances. First, some of them were commissioned by private collectors who wanted to have a painting at home. Secondly, after receiving the order, Munch created two versions at once, after which the client chose the one that he liked more and the other artist kept for himself. It also happened that the master really did not want to part with one or another picture, but since he still had to give it to the customer, Munch wrote its new version for himself. It should only be noted that each of these eighteen canvases has its own pictorial concept, different from the others: the artist never repeated.