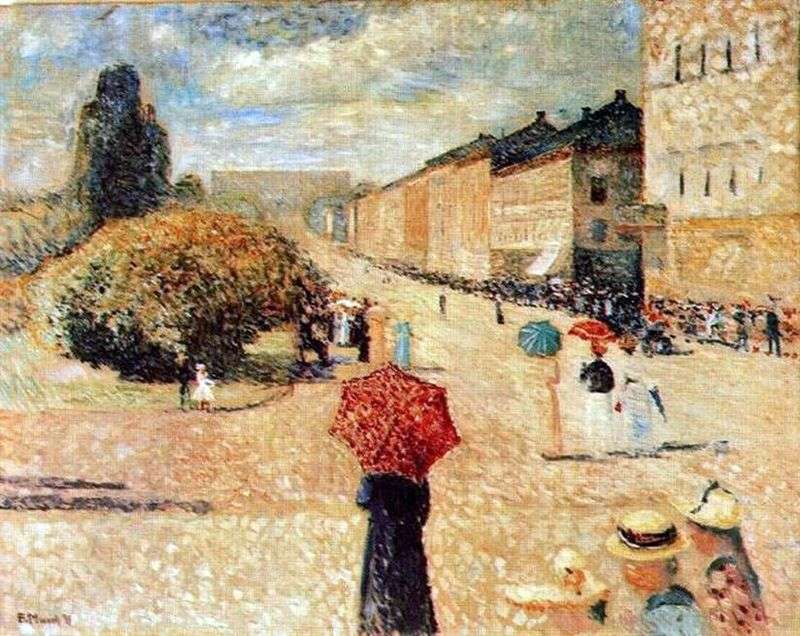 The work of Edward Munch “Spring Day on the street of Karl Johan”, written in 1890 during the artist’s stay in Norway, shows his work from the other side. The picture clearly shows the influence of the Impressionists.

The picture is permeated with light emanating from all its points. The artist achieved this effect thanks to a special style of drawing: the paints were applied with separate clear strokes – dots or strokes. Impressionistic is the style of writing a picture, but not composition.

The artist depicted on the canvas the main avenue of the capital of Norway – Karl-Johans-gate, Karl Johan Street, a favorite place for walks of the most diverse public. The picture shows the entire avenue – from the royal castle, depicted in the background, to the Grand Hotel, which is shown in the right in the foreground.

The dark blue line of the roofs echoes the walking public, forming two parallel in perspective straight lines. The main element of the central part of the composition is a woman with a red umbrella, with her back to the viewer. The contrasting colors with which Munch portrayed a woman distinguish her from the general plan and the atmosphere of the scene.