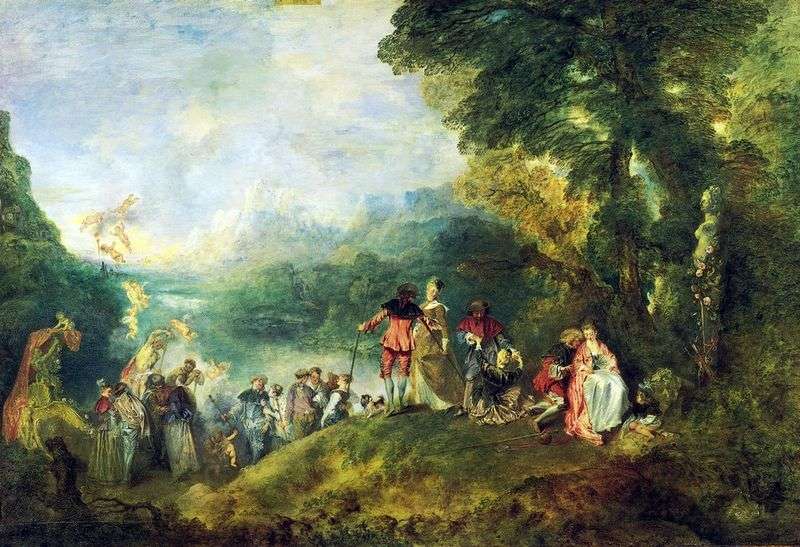 This highly elegant picture of Watteau was presented by the jury of academicians at his election to the full members of the Royal Academy of Painting and Sculpture in 1717. Let us remind the reader that the island of Kiefer, which appears in the name of the canvas, is Cyprus, the birthplace of the goddess of love of Aphrodite.

Therefore, the pilgrimage to Kiefer was for the French of the 18th century an allegory of a very transparent one. “Pilgrimage to the island of Kiefer” is more of a mood than a narrative picture, as, indeed, most of the work of Watteau.

From the title you can conclude that the author wants to show us the “holiday of love.” But no. Rather – the end of the holiday, when all the ambrosia is eaten and nectar drunk. Feeling of fleetingness and fragility of happiness is emphasized by the autumn, twilight transparency of the landscape.

Antoine Watteau often included in his compositions statues associated with the plot and mood of the picture. In the “Pilgrimage to the island of Kiefer,” the statue of Venus is half-hidden in the shade of trees. We look to her through the pink flowers, with which we see the stone body of the goddess. Note that the quiver of a statue of a goddess is tied with a pink ribbon and a quiver with arrows. This is a sign of the presence of Cupid, playful son of Venus. As for the pink color, Watteau sprinkles it so that he leads the viewer’s eye along a whimsical trajectory – from the pink flowers of Venus, through the cloak of the lady and the bright pink coat of the gentleman standing with his back to the putti hovering in the sky above the island.

Watteau always worked quickly and often applied paint too hastily, which sometimes led to blots and distortions. But in this case it was this haste that helped the master to brilliantly convey the texture of the foliage – it only becomes more expressive thanks to the marks of the brush left on the surface of the picture. Paints are applied in thin, almost transparent layers, in the technique “wet on wet”, while brown tones look through the green, which undoubtedly enriches the tonal range of the picture. In the same manner, Thomas Gainsborough wrote to the foliage, highly respected the talent of Watteau.