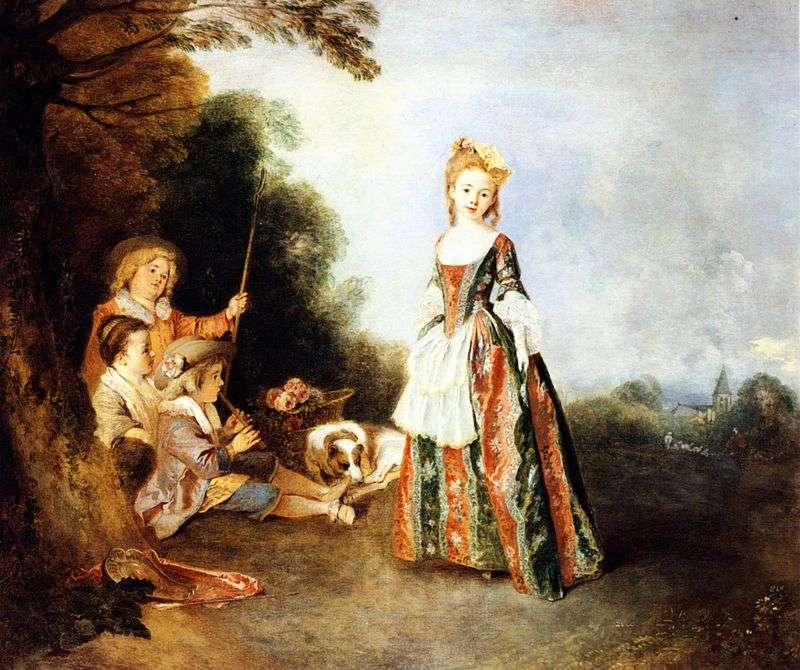 Painting by the French artist Antoine Watteau “Dance” or under a different name “Minuet.” The size of the painting is 97 x 116 cm, canvas, oil. Followers Watteau were painters Lancret, Pater, Fragonard, much inferior to him, and also partly to Chardin and Boucher.

In Paris, soon enough passed the passion for the paintings of this kind, Watteau’s name was pronounced with disdain, and during this time most of the artist’s paintings “gallant festivities” moved to England and Prussia. Then again the time came when Watteau’s artistic reputation was restored, but the paintings of the painter in France no longer returned.

At the end of the 18th and in the 19th century, Watteau’s paintings began to enjoy such prominence that more than 60 engravers were busy reproducing them in prints. Watteau created eight engravings throughout his short creative activity. In the 19th century, only one picture of Watteau was kept in the Louvre Gallery in Paris, there were two paintings in the Dresden Picture Gallery, in Berlin – four.

The Hermitage collection in St. Petersburg owns such paintings by Antoine Watteau: “Actors of the French Theater”, “Caprice”, “Savoyard Boy with Marmot”, “Fixing Proposal”, “Gravities of War”, “Military Senses”. It should be noted that Watteau did not sign his paintings. Minuet, an ancient folk French dance, from the middle of the 17th century became a ballroom dance.