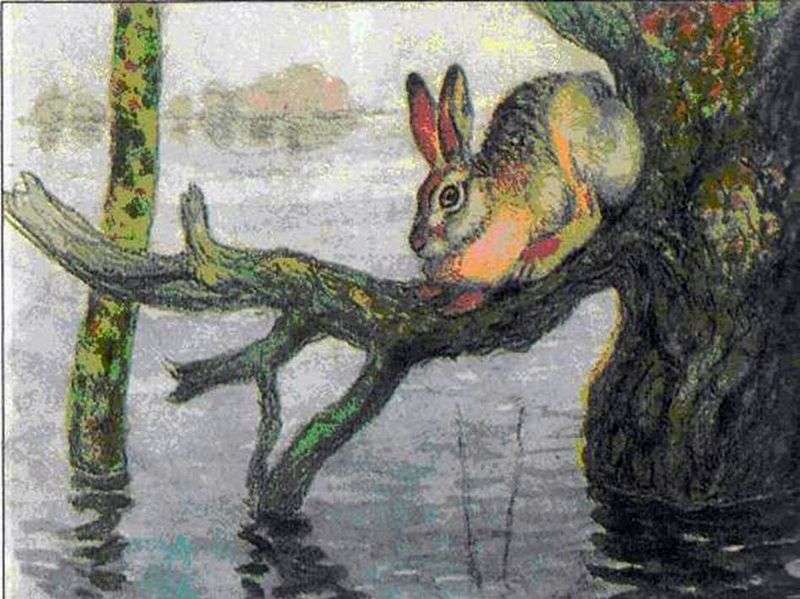 Komarov is considered one of the most talented animalists. Animalists call artists who skillfully depict animals in their works. Not for nothing they say that in order to depict an animal, an artist needs to know not only about the appearance of them, but also about the characteristics of their characters and even sometimes habits. This kind of knowledge helped this artist create his bright and expressive masterpieces, one of which. Is the picture of the “Flood”.

And my opinion, this work tells about a rabbit, which most likely got into trouble. The early spring is depicted on the canvas, when the warm sun melt the snow and a flood comes, which always comes suddenly. On such days, the water in the river begins to increase at an incredible rate and floods everything around. Not only are people suffering from flash floods, most of the blow comes from animals, which are forest dwellers. Most animals have to leave their burrows in a hurry and seek new shelters from the water, finding elevations or other places where the water does not reach them.

On this canvas, we see the artist depicting a hare, which climbed from the fear of high water to the branch of a large tree, and froze against the bark. His big eyes are filled with fear of what is happening. He raised his ears alert, and probably listens to what is happening around him. It seemed to me that the bunny sometimes glances down at the muddy water, which very close rose to its branch. I felt sorry for the poor hare, because he could not be saved, the water was about to rise to its branch. Even if the hare can climb on a branch higher, his death will inevitably await him. In the event that the flood does not begin to subside, the hare will remain hungry.

I wanted to think of a good continuation of the picture, that the water began to recede, and the hare escaped. It is very unfortunate that with such natural phenomena, it is necessary to perish innocent animals.