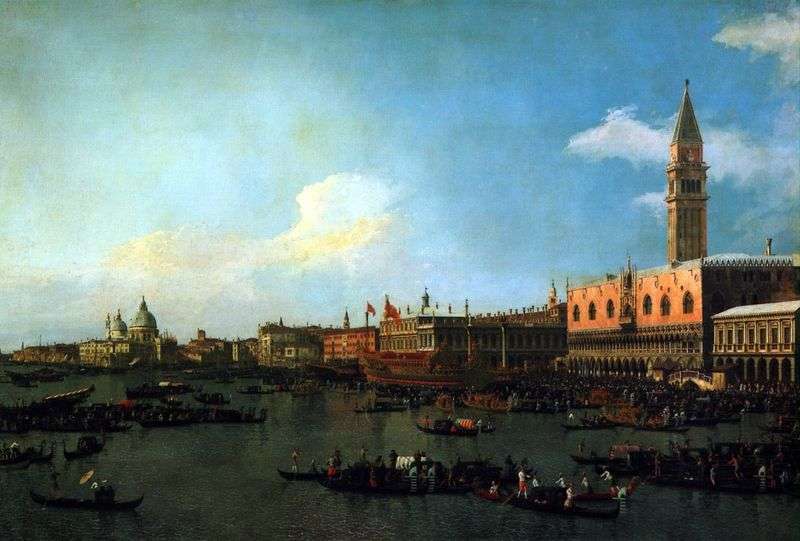 In the painting “Buzentavr” is preparing to sail from the mall on the day of the Ascension “Doge, on which the artist is looking from afar, across the bay of St. Mark, is going to board the” Butsen-Taurus “- the most magnificent state ship. The deck of the ship is one of the most significant events of the Venetian calendar – the symbolic betrothal of Venice to the sea. As per the custom, every year on the day of the Ascension, the doge must throw the ring into the Adriatic Sea.

The artist decided to depict this event. The custom of celebrating the betrothal of Venice with the sea in a big way gave Canaletto an excellent opportunity to show on canvas the splendor and splendor of the Venetian festivals.

The works of Canaletto, the leading Venetian landscape painter of his time, enjoyed immense popularity, especially among the English aristocracy. Types of canals and palaces of Venice with their rich details still lead the viewer to rapture. In 1746, Canaletto visited England and painted a number of landscapes there, including the views of the York Castle, Eton College and Whitehall, but these works of the master are much less known than his guides.

Venice at all times was flooded, but in the XX century. their frequency and scope have assumed a threatening character, which is explained by specialists with a general rise in the level of the world’s oceans due to global warming and the rise of the bottom of the Venetian lagoon due to the soil that is constantly washed away from the “hard earth”. The dam project, which appeared in 1994, made it possible to regulate the water level in the lagoon and prevent floods.

The work of Canaletto over the images of the views of Venice has always come with particular painstakingness. So, in many of his paintings you can see the views and panoramas of the city and the lagoon at different times of the year, during tides. Canaletto always made sure that the image in the picture exactly corresponded to the original, and therefore he used a pinhole camera, an adaptation that allowed the contours of distant objects to be transferred to paper.

It is noteworthy that the work of Canaletto has found practical application already in our days. It was decided to build a dam that would protect Venice from devastating floods. So, when designing this grandiose building, engineers and architects to determine the safe water level turned to the pictures of the famous Venetian artist of the XVIII century.