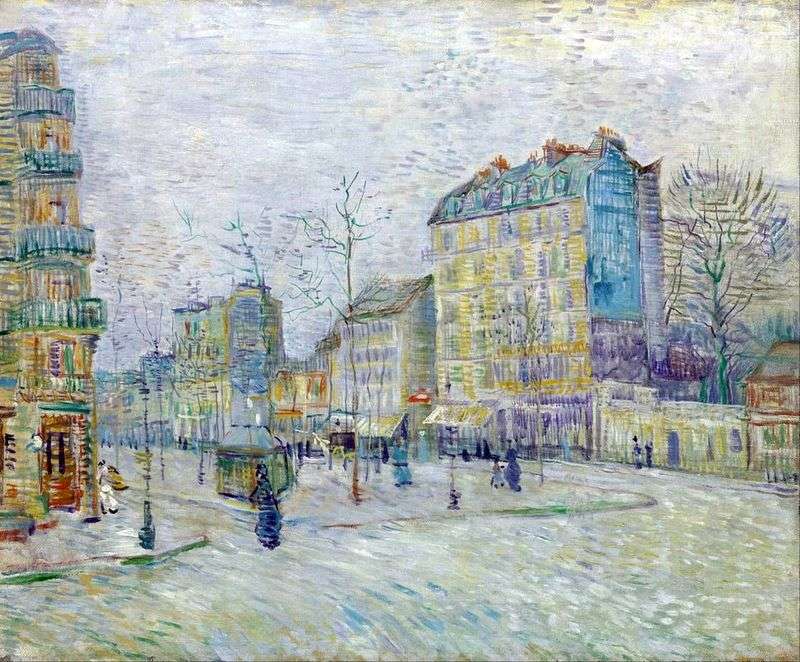 In a painting written in 1887, Van Gogh captured the corner of the boulevard near the street Lepik. On the Boulevard Clichy at one time lived artists P. Signac, J. Sulfur, J.. Russell. There was also a cafe “Tambourine”. In 1887 a group of artists, including Van Gogh, organized a small exhibition in this institution. Van Gogh, like other Parisian artists, often depicted local urban landscapes. Boulevards, small streets, cafes and houses in Paris have often become plots for his paintings.

This painting is one of the most impressionistic works of Van Gogh. The artist strengthens the perspective, choosing a high point of view, which causes the viewer a clear sense of current urban life. The sky is depicted by a combination of fast, light strokes of blue and ocher hues conveying the fluctuation of air.

The boulevard with massive stone houses in the background goes into a light hazy haze, and on the walls of the buildings and the masonry of the pavement one can see the lilac shimmering of the sky, which makes the picture even more alive and airy. Thin, light branches of autumn trees support this sensation, losing itself against the background of clouds. Focusing all his attention on the transmission of the game of light and the air environment, the artist does not attach importance to volumes, depicting houses and walking along the pedestrian street with quick short strokes.

On the right in the picture you can see the beginning of Lepik Street, where the artist lived.