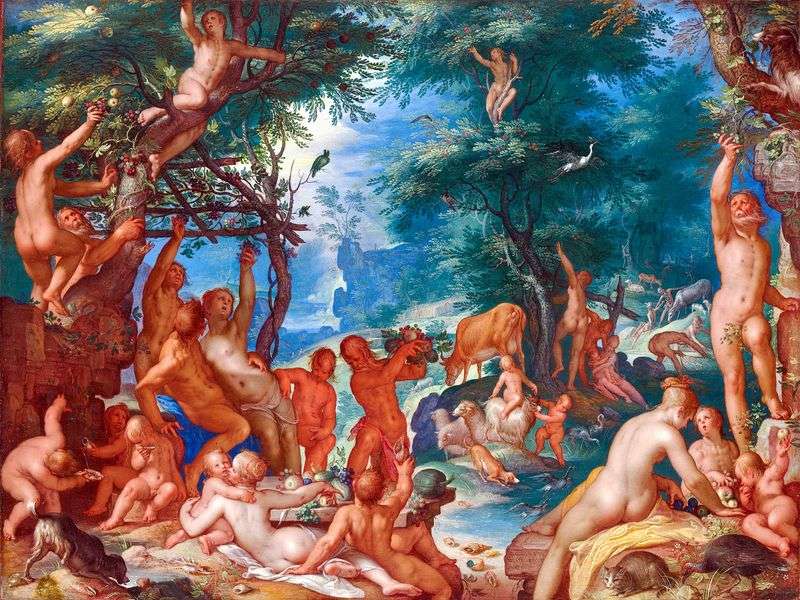 Painting by artist Joachim Ejteval “The Golden Age”. The size of the picture is 121 x 89 cm, canvas, oil. The Golden Age is a common idea for many peoples of the carefree, full of all the blessings and innocent life of the first people. Usually in the features characterizing this “bliss”, there are no elements of the higher intellectual order and “bliss” is reduced to animal welfare, which proves the ancient antiquity of the legends. In Greek literature, the legend of the Golden Age found its development in the story of Hesiod about four generations: gold, silver, copper and iron.

Between the latter two, Hesiod still has a generation of heroes that violates the progressive deterioration of the human race. In Roman literature the same plot, and very close to Hesiod, except for the insertion of heroes, was processed by Ovid. Even before the accession of Zeus, under Kronos, there was this blissful time. People lived in close proximity to the gods. They knew neither sorrow nor disease; there was not a slow old age. Death, light as a dream, came after a long happy life.

The earth itself brought everything necessary, without any treatment; abundant herds supplemented the contentment of the first people. Having descended, under the will of Zeus, to the ground, the Golden Generation lives there on the islands of the blessed, under the power of Kronos, revered by people, as a generation of demons, benefactors of all blessings. The expression: “life under Kronos” was included in the proverb, in both vernacular and literary language. Plato and, in particular, Dykearch speak about these primitive times, raising, of course, the ancient concept of “bliss”.

Dykearch, by the way, sees one of the basic reasons of bliss in conscious abstention from any excesses, cleanliness sincere and not a food. Comedians sometimes portrayed the Golden Age in playful colors, drawing in particular on the abundance of food in this blissful era, etc. Source of the article: Encyclopedic Dictionary of Brockhaus FA and Efron IA