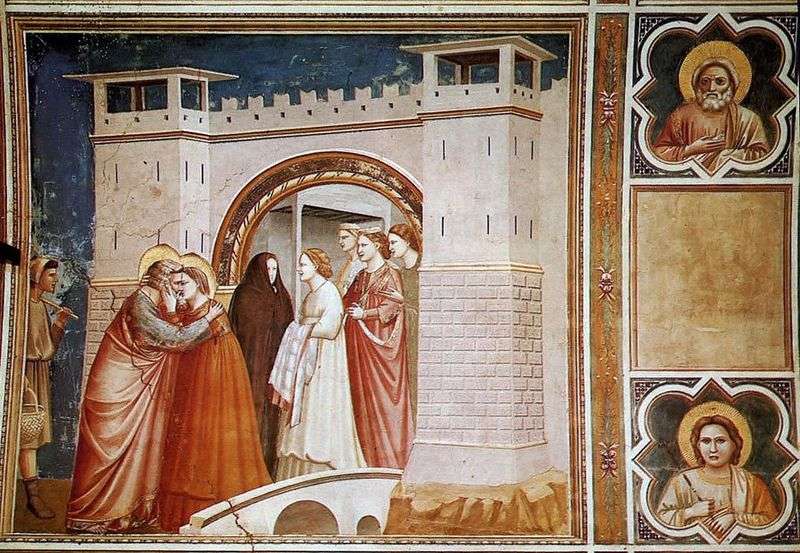 Giotto introduced into the traditional system of murals new subjects related to the life of Joachim and Anna, the parents of Mary – the Mother of Christ. The landscape in the scene of the meeting between Joachim and Anna at the Golden Gate is more real: the wall is slightly diagonal, from the gate a group of women leave.

All attention is concentrated on the joyful embraces of the spouses, who at last received the good news that they will soon have a child. According to legend, the elderly couple Anna and Joachim, after the angel individually announced to everyone that they have a child, hurried to meet

each other. Anna accompanied by several women goes to meet the returning husband from the field, and they meet before the Golden Gate of Jerusalem. Deeply excited, they embrace each other warmly.

In the picture, the fusion of their figures is emphasized by the unity of the high gate tower in the background. The line of two merged profiles, as it were, continues, emphasizing, the upward directed vertical of the right-hand corner of the tower. As through the narrow loopholes in the bare walls of the towers one can not see the life of the city, and it is impossible to guess by the faces of the main characters of the scene what is happening in the souls of happy spouses. Their feelings are reflected more on the faces of women standing under the arch of the city gate, and on the curious face of the shepherd boy in the left corner of the picture.

The compositional unity of the scene is emphasized by internal tension, the suggestive power of looks and gestures. Elements of architecture – a wide arch of the gate and gate tower – dismember the characters into separate groups, but simultaneously unite them. The depth of the foreground passes a stone bridge across the city ditch. The credibility of the space behind the gates is achieved by a voluminous drawing of the terrace on two pillars, simultaneously emphasizing the three female figures under the arch.