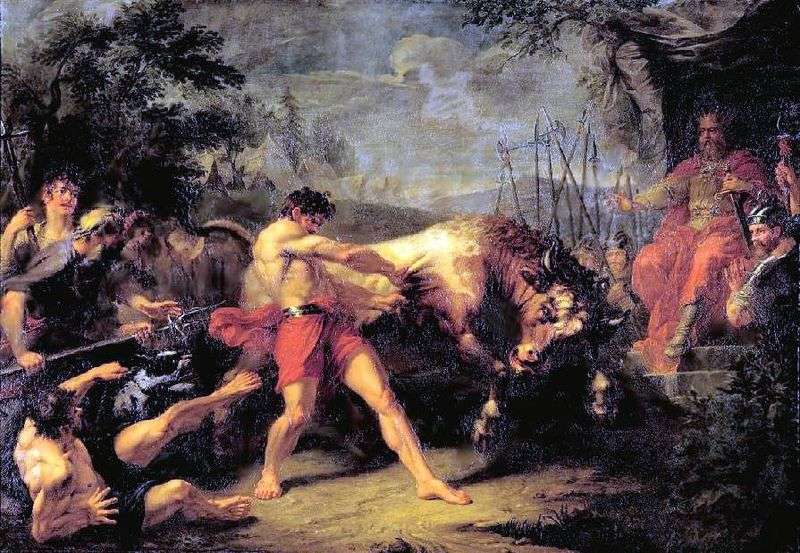 In the “Tale of Bygone Years,” recorded at the beginning of the XII century, it is described that in 992, during the reign of Prince Vladimir, Kiev was besieged by nomads – Pechenegs and the fate of the city was to decide the duel. A simple leather jug by the name of Yang accepted the challenge of the Pecheneg strongman. And before the fight, he with honor passed the test, tearing out a piece of skin from the furious ox released on him. Then he defeated the Pechenegs and saved his native city.

The effective composition of the picture is built on clearly expressed diagonals: the bowed to the left figure of Jan Usmar is plastically balanced by a massive carcass of a bull, tearing to the right. Far away, on the dais – Prince Vladimir, greeting Jan, behind him – druzhinniki with spears. The warrior to the right, at the very cut of the picture, is clothed in Roman armor and a helmet with a snake.

Such interpretation of the image of the national hero was traditional for the masters of the Academy of Arts, focused on monuments of the classical past. This is due to the fact that at the end of the XVIII century archeology was not yet formed as a science, and the artist simply did not know what the ancient Rusich looked like. For this painting in 1797 Ugryumov received the title of academician.