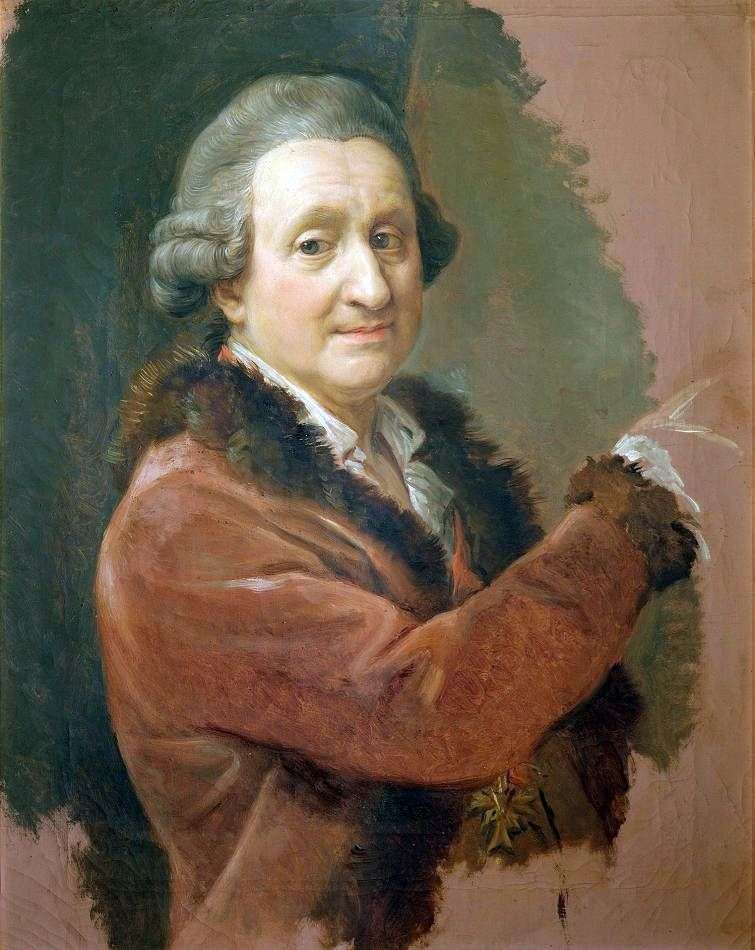 Unfinished self-portrait of the Italian artist Pompeo Batoni. The size of the portrait is 75 x 44 cm, canvas, oil. Italian painter Pompeo Dzhirlamo Batoni was born on January 25, 1708 in Lucca in the family of jeweler Paolino Battoni. He studied painting in his native city near Lombardi and Brugeri. In 1727, at the age of 19, Pompeo Batoni left his father’s flourishing jewelery shop; the goal of the young artist is the study of painting in Rome. After moving to Rome, Batoni spent some time studying and working in the workshop of artists Konki and Mazucci. In Rome, Batoni spent his time studying ancient antique sculptures and frescoes by Raphael, Michelangelo, Hannibal Carracci in the Vatican. Over time, the artistic circles of Rome spread the news about the artist’s ability to copy classical sculptures.

The works of Pompeo Batoni awaken interest from Englishmen interested in antiques, and Roman collectors. Fostered on the antiques and creations of Raphael, Batoni first tried to fight against the mannered direction of his time, but did not go beyond academicity in the Baroque style. In 1729, Batoni marries Katerina Setti. The beginning of wide popularity and further glory of the artist was put by the case. Seeking refuge from a sudden heavy rain, Count Gabrieli Valetta Gabbio took refuge in the arcade of the Palace of Conservatories, where he met a young talent – painter Pompeo Batoni, who wrote an ancient bas-relief.

Admired by the abilities of the artist and the accuracy of his drawing, the Count wished to see his paintings and was so impressed with Batoni’s talent that he immediately offered him a job in creating the altar of the chapel of the Gabrieli family. Then the other orders of the earl – pictures “The Vision of Saint Filippo Neri”, “The Triumph of Venice” and “The Allegory of Art” followed.

Creativity and glory Batoni, as an artist of the historical genre, was especially supported by the noble patrons of Lucca, Florence and Forlì, for whom the painter created mythological and cult paintings. The death of Catherine’s wife in 1742 left Batoni a widower with five children. The best pictures include: “The fall of Simon the Magician” in the church of Santa Maria deli Angeli in Rome; The breathing, unholy “Penitent Magdalene”; “Holy Family”; “Centaur Chiron returns Achilles to his mother Thetis” and “The abstinence of Scipio”; “The Darius Family before Alexander”; “The Heart of Jesus”; “The ceiling of Colonna’s gallery” in Rome. In 1747, Batoni married Lucia Fattori, who later gave birth to the artist of seven children.

Three of them, as they grew older, helped Batoni in his workshop. Beginning in the mid-1750s, Batoni worked primarily as a portraitist, giving this genre in Italy the status of one of the leading genres of art. Batoni enjoyed enormous fame as a portraitist. He painted portraits of the popes: Benedict XIV, Clement XIII and Pius VI; Emperor Joseph II and his brother Leopold of Tuscany. Portraits of Pompeo Batoni had a huge impact on European painting of the last quarter of the 18th – early 19th centuries, on the work of other neoclassicists, in particular Anton Rafael Mengs, Domenico Corvi, Angelica Kaufmann.

The traditions of the artist Batoni, embodied in portraits of Englishmen and Irishmen who traveled through Europe within the framework of the “Big Tour”, were continued in England by Joshua Reynolds. Constructed by the Holy Roman Emperor Joseph II for his work in noble dignity, the artist died on February 4, 1787 in Rome.