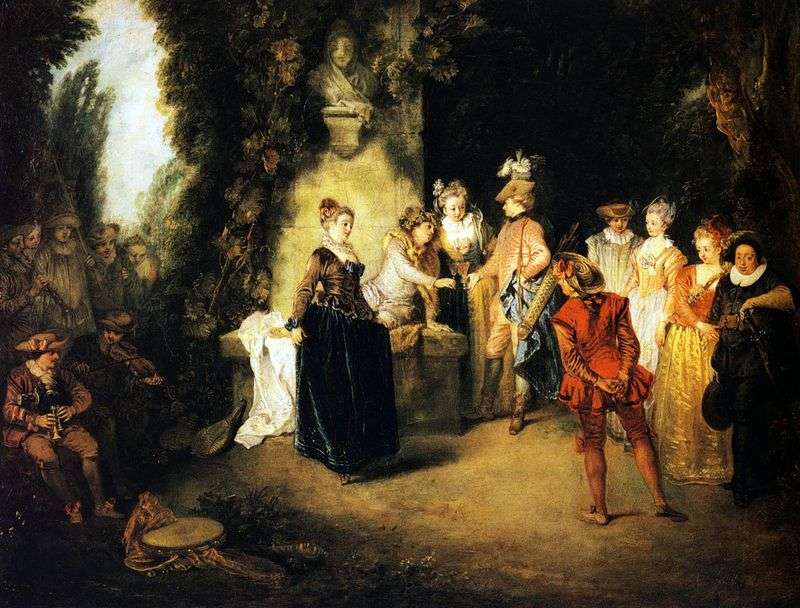 Painting of the French painter Antoine Watteau “French Comedy.” The size of the painting is 37 x 48 cm, canvas, oil. The painting is also known as “Love in the French Theater.” In the beginning of the 17th century, along with the Italian comedy in France, pastors, alterations for the stage of pastoral novels, and tragicomedies, plays as if replacing the vast space between comedy and tragedy.

Actually, the comedies, constrained by the artificial observance of the unity of time and place, froze on the French stage and their form does not change until the middle of the eighteenth century. They usually wrote in verse, which made it even more artificial. But the style achieves the highest perfection in “Melite” and “Liar” by Corneille and in the “Sufferers” Racine. Along with the improvement of style, the French comedy acquires a salon and exquisite character; her characters begin to speak, like the courtiers of Louis XIV. The humorous jokes of classical comedy are also cast out and give place to a more elegant wit and play of words.

Comedies were divided into “Comedy characters”, “Comedy intrigue” and “Comedy morals.” These names were given, however, arbitrarily, rather by the talent of the authors than by the principles of design. They hint, however, on the ethical significance that the theoreticians of literature tried to give to the comedy, Cornel and Boileau. The subjects of the French comedy were drawn, however, very often from Spanish playwrights.

Among the contemporaries of Corneille and Racine are Rotra, Scuderi, the author of the Comedy of Actors, Thomas Cornel, who wrote “Mrs. Joben”, and Kino, the author of “The Mother of the Coquette”. Separately stands Scaron, with his inexhaustible wit, turning often into buffoonery. In his comedy “Typhon and Virgil Inside Out” comedian Jodiele was nominated, after whose name the third play of Scaron was named, which had the greatest success. Moliere’s comedy partly returns to Italian models, for example, in “Sganarelle” and “Scrapes of Scapin,” but at the same time brings life’s truth, a typical completeness in the portrayal of actors.

Immortal comedies of Moliere: “Tartuffe”, “Misanthrope”, “Miserable”, “Georges Danden” are indicators of the heyday of classical comedy. Among the successors of Moliere, Otrosh, the author of “Doctor Crispin”, Monflier, author of frivolous plays like “School of jealousy”, Burso, who wrote so-called comedies &; agrave; tiroirs, and Baron, the author of the comedy “Schastlivets”.