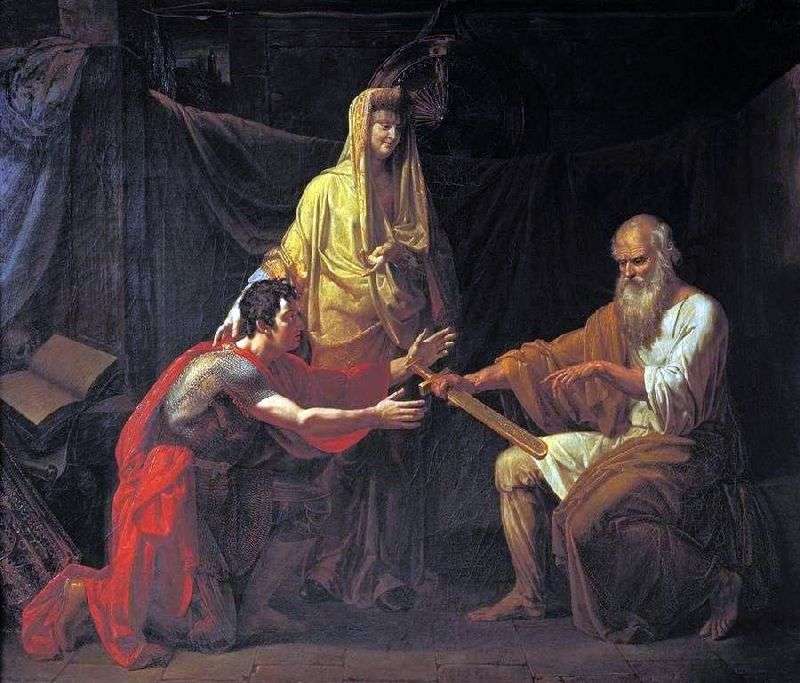 The painting was written according to a program given March 14, 1808 to a group of retired and pupils of the Imperial Academy of Arts of the 4th age. In the center of the composition is depicted Martha – a majestic woman who led the struggle of Novgorod with Ivan III, the heroine of one of the unfinished “doom” Ryleeva. At the direction of Marfa, the hermit Feodosy Boretsky, her grandfather, gives Miroslav, chosen to marry the daughter of Marfa Xenia, a sword to fight for the independence of Novgorod. The ancestor of Theodosius Ratmir wrote in gold on the sword: “He will never get an enemy.”

Before us is a strictly calibrated classic composition based on the diagonal arrangement of the characters’ figures and their location on the canvas, on the clarity of the contours and linear rhythm, comparing local color spots, contrasts of light and shadow, and vigorous chiaroscuro modeling of figures. For this picture Ivanov received in 1808 a commendable response from the Academy of Arts.

Dmitri Ivanovich Ivanov refers to those artists who in any country make up the bulk of persons who have devoted themselves to the fine arts. They became masters, but not so great as to leave a significant mark in the history of fine arts. But even without them, none of the arts exist, because only mass character creates conditions for the birth of non-ordinary things. Here Russia is no exception. And this is true for our times, when out of hundreds or thousands of young people who have received diplomas for special education, dozens of people claim themselves at best. So it was during the formation of Russian painting in the XVIII-XIX centuries. D. Ivanov was from 1803 a student of the Academy of Arts. He studied with the famous master and teacher GI Ugryumov and established himself as a strong academic.

In 1805, the young man receives a gold medal for the execution of the program proposed by the honorary lover of the Academy of Arts, Count SO Potocki, “To present the courageous feat of Patriarch Nikon in taming the people’s rebellion.” Even more fruitful was for D. Ivanov in 1806, in which he received small and large silver medals for his drawings from nature, the second gold medal for the program “The reception of Greek ambassadors with rich gifts by Vladimir Monomakh.” In the same year he graduated from the Academy with a first-degree certificate and a sword. And in 1808 DI Ivanov for the painting “Marfa Posadnitsa” is awarded a commendable response.

It is known that in 1808-1810 the artist made a trip as part of a historical and archaeological expedition across Russia, where he executed hundreds of drawings, drawings and copies from ancient Russian architectural structures. Copies of DI Ivanov from the mosaics of St. Sophia’s Cathedral in Kiev contemporaries were considered the most accurate copying drawings of the original. Unfortunately, after 1810 there is no information about the life of the artist.