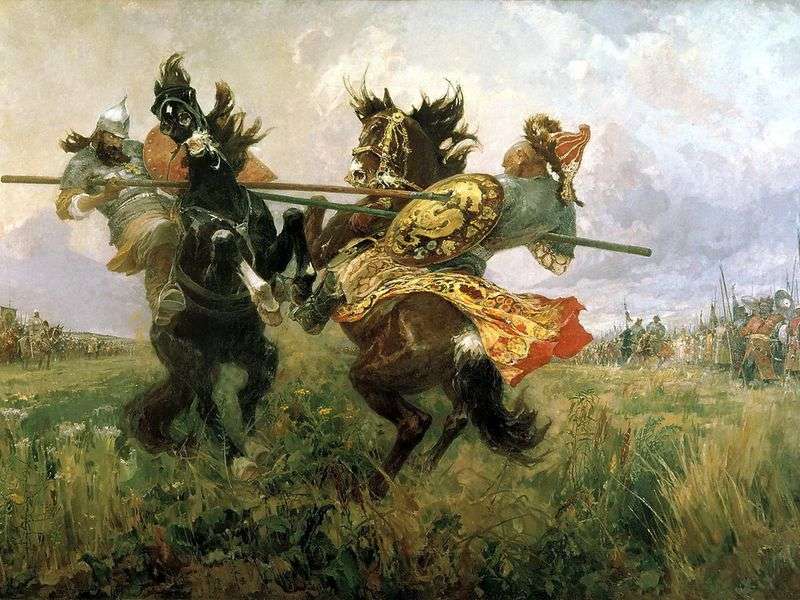 Avilov portrayed the battle that took place between the Russian hero and the warrior of the Tatars. It was with him that the battle began on Kulikovo Field.

Avilov wrote this painting when the defense of Stalingrad was on. The artist said that the composition of his painting is incredibly simple. In the center, we see two horses, snaking up. They are seated: Peresvet is on the left, and on the right is the Chewboy.

The artist depicts the main characters very large. They completely eclipse everything else that is depicted on this canvas. Avilov specially exaggerated their gigantic strength and enormous growth. He brought them to the truly pathetic sound that is characteristic of the epic.

The painter raises the figures of the gigantic horses depicted above the plain. They look like fanciful pyramids.

Paints are most intense in the image of the two main characters. Armies., Which are seen somewhere far behind them, are deliberately written very pale. The horses look really awesome. Their manes flutter warily, and their mouths are completely bared.

The artist uses a whimsical play of colors in order to convey the colors of a certain state of the soldiers. On the left the gray shade predominates. He talks about maximum confidence and excellent restraint of soldiers. Warriors anxiously await the outcome of this grand duel. But at the same time they stand unshakably, like a rock of granite. Before the army, Avilov drew Dmitry Donskoy himself on a white horse.

To depict the troops of the Tatar-Mongols, the painter chooses colorful and vivid shades. This indicates that the enemy is completely insecure in his abilities. He doubts whether it will be possible to win or to surrender at the mercy of the winner.

The canvas of Avilov is as expressive as possible. Everybody is waiting for the denouement. The artist skillfully conveys the impending tension.