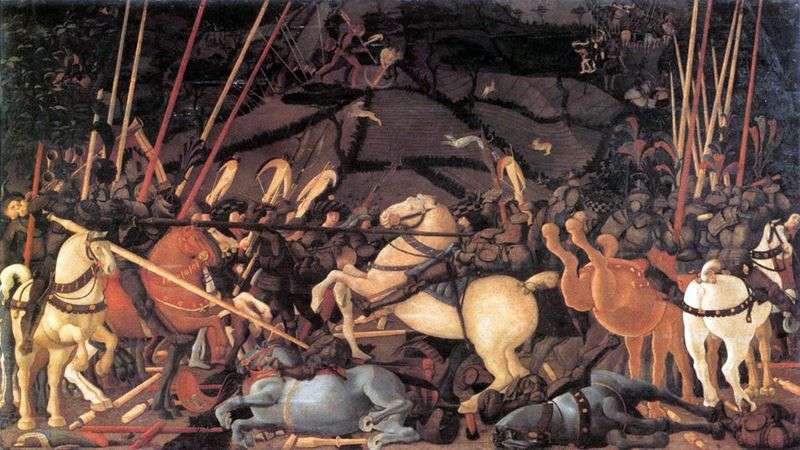 The presented picture of the artist quattrocento Paolo Uccello – one of three, written by him on this topic and who stood at the origins of the battle genre in European art. All these works, ordered by Leonardo Bartolini Salimbeni, who participated in the battle, depict the moments of the battle of the Florentines with the Siennes, which occurred in 1432. In the painting “The Battle of San Romano” Florentine knight with a spear knocks out from the saddle the leader of the enemy troops Bernardino della Czarda.

Seated on a white horse, the leader of the Florentines, Niccolo and Tolentino, had already overturned one of the enemies to the ground. Around the battle is going on, “horses are mixed together, people”, spears and crossbows are raised, knights and their weapons are flying to the ground. The tension of the whole scene is also due to the fact that a lot of figures fit in a small space, besides the edges of the composition are deliberately cut off by a frame, which makes it seem that it is cramped within the allotted limits. Uccello depicts his characters in a variety of poses. Probably, for the sake of training in this skill, he also took up his work.

The red horse on the left, galloping away, gray, with the knight fallen with him, the white one on which the leader of the Florentines is seated, show how the artist coped with the complex perspectives and perspectives. The dynamism of the whole scene is emphasized by the color, in which bright, clear colors are encountered.