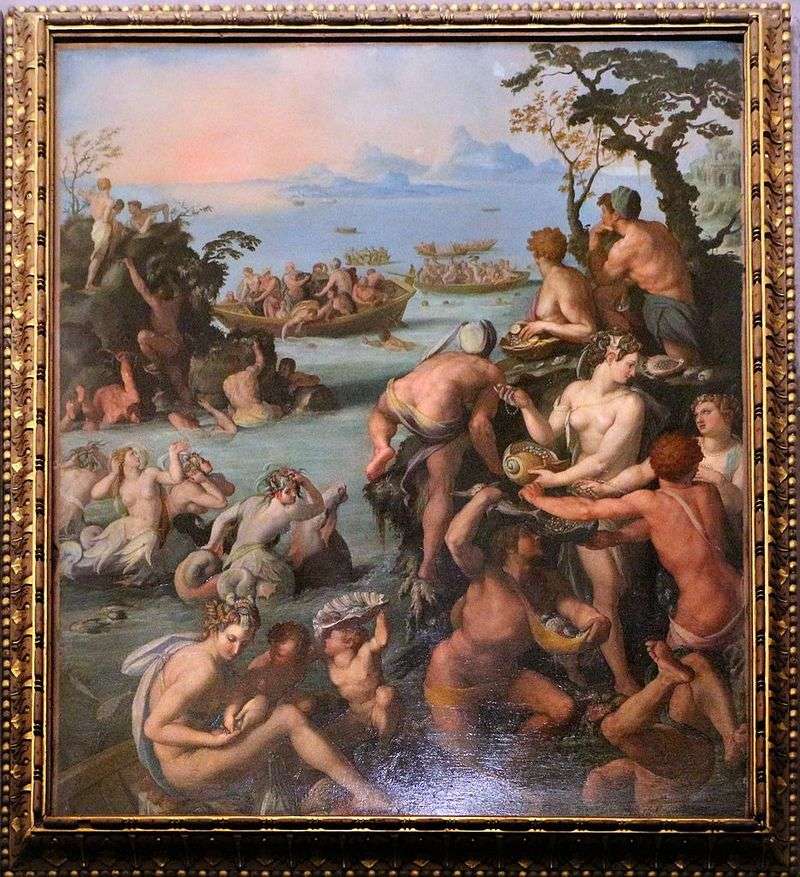 Painting of the Italian artist Alessandro Allori “Pearl Fishing”. The size of the painting is 116 x 86 cm, slate, oil. In the last third of the 16th century, the decorative painting of Florence acquires a refined and exquisitely-cold character. Such are the paintings and panels of the secret office, the so-called Studioolo, the Grand Duke of Tuscany Francesco I in Palazzo Vecchio, executed by Allori, Naldini and other students of Vasari and Bronzino.

Francesco I, like all the Medici, patronized the arts, he founded the Italian Grammar Academy and founded the Medici Theater. But especially the duke was interested in natural sciences, to which he had a passionate passion. Francesco I was eager to study chemistry and alchemy.

In the Palazzo Vecchio, he took under them a special room – the Studio Francesco the First, where he spent many hours. It was a personal laboratory and at the same time a cabinet of curiosities, where various curiosities were collected, as well as mineralogical samples. The interest of the Grand Duke in chemistry led to the founding of an enterprise for the production of porcelain and ceramics, which subsequently produced the famous porcelain of the Medici.

In addition, Francesco’s name is associated with the creation of the famous Uffizi museum – buildings were started to be built as an administrative under his father Cosimo I, but in 1575 Francesco I ordered the removal of administrative institutions and the transfer to the Uffizi of the most valuable items from the family collection of works of art scattered throughout numerous palaces and villas of the Medici.

Pearls represent deposits of pearlescent substance in the shells of various marine and freshwater molluscs around foreign bodies, which serve as a source of irritation for the body of the mollusk. The pearl consists of concentric layers of organic matter impregnated with mineral salts, the color play is caused by the interference of light due to the undulating surface of the pearlescent layers.

The best pearls do not have their own color, but yellow, pink, reddish, greenish, brown, grayish and black pearls can occur. Pearls can lie freely on the bottom of rivers and seas or be attached to a shell, the latter being valued incomparably lower. Sometimes pearls reach an extremely large value: the Kensington Museum has a pearl, the circumference of which is equal to ten centimeters, and the weight of 18000 gr.

When catching pearls on each boat there are from four to ten people diving, working in pairs: while one dives and collects shells and pearls, the other pulls it out and collected prey, then they change roles. For lowering to the bottom serves a large stone, tied to a rope. Hunters dive naked, wearing only a belt and grabbing a bag for shells and pearls. The duration of stay underwater normally 45-50 seconds, in exceptional cases even 90-120 seconds. On health, pearl fishing is extremely destructive. Pearl fishing continues from sunrise to noon. A quarter of the collected shells usually serve as reward for the pearl fishermen.