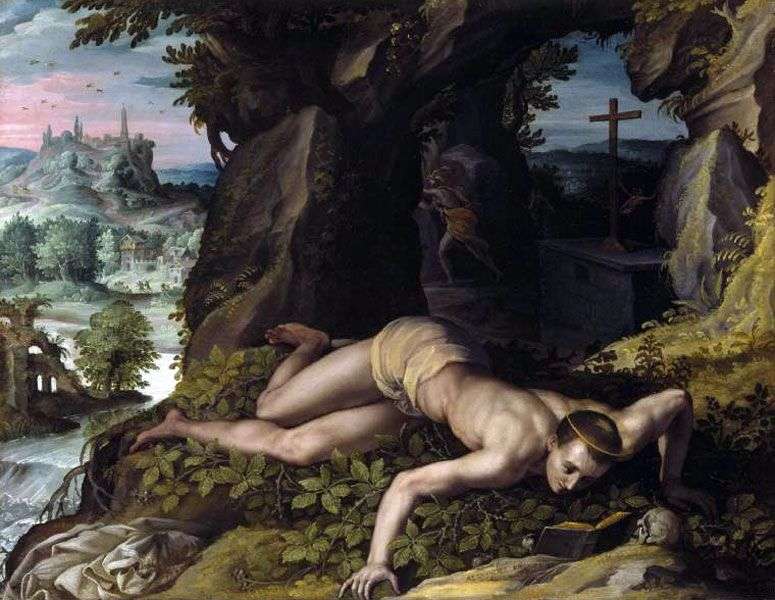 The painting by Florentine artist Alessandro Allori “The Temptation of Saint Benedict”. The size of the picture is 41 x 59 cm, canvas, oil. Saint Benedict of Nursia, a reformer of Western European monasticism, was born in 480 in Nursia. At first he devoted himself to studying science in Rome, but, indignant at the depraved life of his comrades, retired to the desert in the 14th year of his life, where he indulged in pious meditations in a cave.

Honored as a saint and miracle-worker, Saint Benedict was elected by the monks of the cave Vicovar monastery in the year 510, but soon left this post when the monks did not like strict obedience and the duty to live exclusively in prayers and labors. Returning to his solitude, Benedict gathered around himself a certain number of hermits, who were settled in the suburbs of Subiyago, in the cinemas arranged each for 12 monks.

When he thus gradually matured the idea of reorganizing the monastic life, Benedict founded a new monastery in Monte Cassino near Naples in 529 with a special order, after which a new monastic charter began to spread widely in Western Europe and was soon introduced almost everywhere.

Not adhering to the excessively strict ascetic rules in relation to clothing and to the care of the body, he required, along with spiritual exercises in prayer, the reading of spiritual writings and the presence of physical labor in the services, mainly in the cultivation of the soil and, in addition, the education of the youth.

The scientific studies, thanks to which the Benedictines rendered so many services to the preservation of classical literature, were introduced only by Cassiodorus. Gregory the Great and Boniface, the apostle of the German lands, especially promoted the universal introduction of the above-mentioned statute in the west of Europe. Benedict died in 543. In describing his life, compiled by Gregory the Great, there are many stories about his miracles.