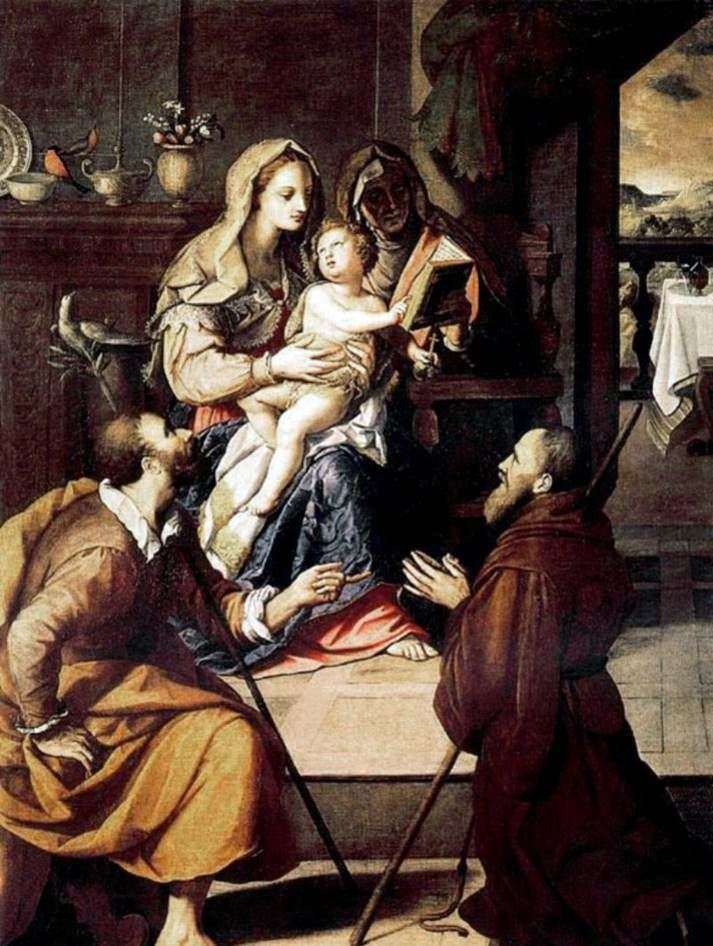 The painting by Florentine artist Alessandro Allori “Holy Family and Cardinal Medici”. The size of the picture is 263 x 201 cm, canvas, oil. Full name of the painting “The Holy Family and Cardinal Fernando de ‘Medici.” Fernando I of the Medici – the Grand Duke of Tuscany, greatly increased the prestige and influence of the Medici house in Italy and beyond. Being one of the younger sons of Duke Cosimo de ‘Medici and Eleonora of Toledo, Ferdinand was not destined for the ducal throne and at the age of 14 was ordained a cardinal.

Having spent his youth in Rome, he collected Italian antiquities in his villa Medici, when the sudden death of his childless Francesco made him the heir of all of Tuscany. The Grand Duke of Tuscany Francesco I and his wife Bianca died one day, on October 17, 1587, during a meeting with Francesco’s brother and heir, Fernando in the country house of Poggio a Caiano. Contemporaries talked about poisoning, although doctors diagnosed malaria. Modern research has shown that both were poisoned by arsenic.

The Tuscan Ducal throne was inherited by Francesco’s brother – Fernando I, who is one of the first suspects in Francesco’s poisoning. Fernando continued to be in the cardinals for almost three more years, until a political alliance with the French forced him to renounce his dignity and marry the granddaughter of Catherine de Medici, Christina of Lorraine. Fernando de Medici showed remarkable insight, supporting Heinrich Navarre with loans while he was in charge of the anti-Catholic party.

With the accession of Henry to the French throne, Fernando I sent his fleet to the bay of Marseilles, where he seized the castle of Ife, which the Spaniards also attempted. This escapade led to the quarrel between Fernando I and the French king, but as a sign of reconciliation he married in 1600 on the niece of Fernando I, Maria de ‘Medici. To appease the German Emperor about this alliance with the Bourbons, Fernando I of the Medici arranged the marriage of his heir with the Austrian princess and sent his troops to the Aegean Sea and to Africa to help the Austrians in their war against the Turks.

The wise foreign policy of Fernando I of the Medici contributed to the commercial upsurge of Tuscany and the strengthening of its finances. Equally well-balanced, Fernando I spent his wealth, giving priority to draining the swampy terrain in the east of the country and turning the provincial Livorno into a significant commercial port of the Mediterranean. Among the arts, he particularly singled out music, and it is not surprising that the first in Florence opera was staged at the court of the Grand Duke Fernando I.